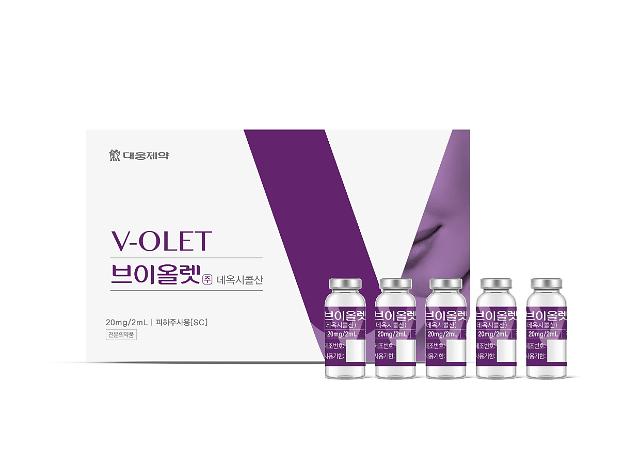 
SEOUL -- Daewoong Pharmaceutical, a bioengineering company in South Korea, will release V-OLET, an injection that reduces excess fat under the chin to meet a high interest in medical treatment that can show quick improvement and have a short procedure time.

V-OLET has been approved by the Ministry of Food and Drug Safety to improve excessive jaw fat in adults. In a clinical study involving Koreans, Daewoong said the product demonstrated safety and efficacy. At 12 weeks after administration, 71.6 percent of the subjects showed improved jaw fat.

Deoxycholic acid, the main ingredient of V-OLET, is characterized by irreversible adipocytolysis, which is different from the mechanisms of other contour medical procedures that temporarily reduce the size of fat. Daewoong said that additional effects of improving skin elasticity can also be expected, such as inducing the neocollagenesis that occurs in the human body as a natural component of wound re- pair.

The fat under the chin can be caused by aging, weight gain, or heredity. It gives the impression of dull and old appearances if it develops excessively, but diet and exercise alone cannot solve it. "We will conquer the domestic market and enter the global market as it is the only officially licensed product that proves its effectiveness and safety," Daewoong's Nabota business head Park Sung-soo said in a statement on October 14.

V-OLET is Daewoong's second medical esthetic lineup following Nabota, a botulinum toxin (botox) product, which is used as the treatment of frown lines.