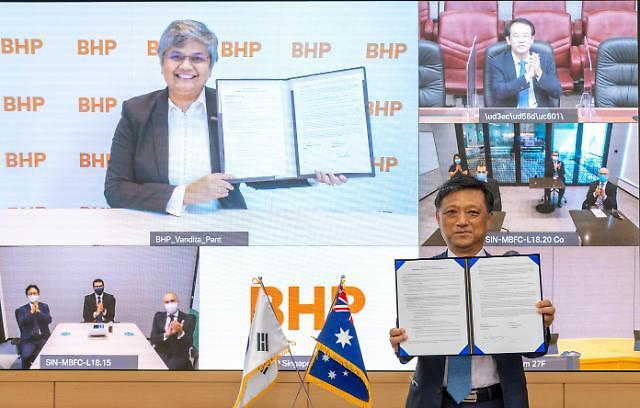 Coke is an important industrial product, used mainly in iron ore smelting, but also as a fuel. Coke is used to remove oxygen from iron ore. BHP and POSCO would jointly develop a coke suitable for use with hydrogen. "We will be able to lay an important foundation for carbon neutrality throughout the steel value chain by utilizing POSCO's steel technology and BHP's mining expertise," POSCO's steel business head Kim Hak-dong said on October 17.

The two companies would accurately identify the possible amount of carbon emissions and develop carbon capture, utilization and storage (CCUS) technologies that provide the foundation for carbon removal or "negative emissions" when CO2 comes from bio-based processes or directly from the atmosphere.

Normally, furnaces use coal as a reducing agent to separate oxygen from iron ore. POSCO has unveiled a project to use hydrogen as a reducing agent in actual operation in 2027. The group aims to produce up to 500,000 tons of blue hydrogen by 2030 and complete a five-million-ton green hydrogen production system by 2050. Blue hydrogen is derived from natural gas with carbon capture technology while green hydrogen is produced from water using renewable power.