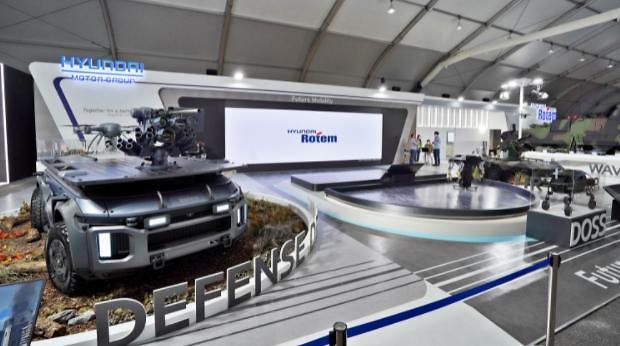 
SEOUL -- A leg-wheel military robot developed by Hyundai Rotem made its debut at an international aerospace and defense exhibition hosted by South Korea. The ultimate mobility vehicle (UMV) uses wheels in flat terrain, but intelligent robot legs use walking ability in rough terrain for various missions such as surveillance and the transportation of injured people and goods. Remote and autonomous driving is possible.

Hyundai Rotem, a subsidiary of South Korea's Hyundai auto group, said that its transformable UMV called "DOSS (daring operations in service and search)" was displayed at ADEX 2021, a five-day event that opened on October 19 at a military airport in Seongnam, a southern satellite city of Seoul. DOSS combined intelligent robot technology and wheels.

In July, Hyundai Rotem delivered two six-wheeled unmanned ground vehicles (UGVs) for a military test operation. With day and night cameras, driving and surveillance images can be checked in real-time through separate monitors from a long distance. The upper front is equipped with a remote-controlled weapon station, and its back has a loading box capable of carrying more than 200 kilograms of cargo or transporting patients in case of an emergency.