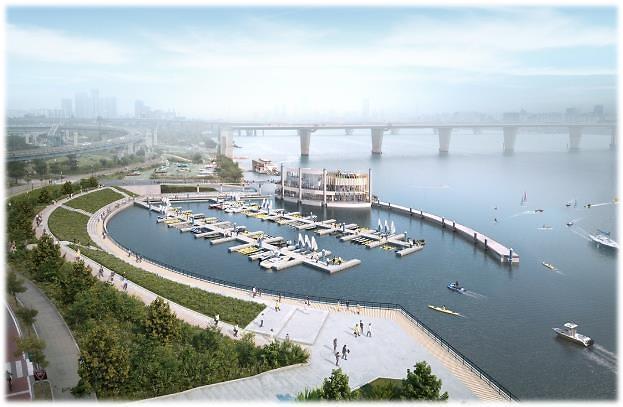 SEOUL -- Through a 15.7 billion won ($13.37 million) project, Seoul City will build an integrated water sports center that can house some 220 water sports equipment such as yachts, canoes and kayaks on Han River where visitors can enjoy extreme water sports.

Seoul said in a statement on October 21 that the city government will open the water sports center in the first half of 2023 near the Nanji Hangang Park in western Seoul. The center will consist of a dock that will serve as a parking lot for water sports equipment such as yachts and small-sized boats. A floating breakwater will be installed to block waves and wind. Seoul has not yet disclosed details about fees.

"About 20 docks in other 11 riverside parks were mainly used by private companies to park water sports equipment and sightseeing boats," Lee Jeong-won, an assistant director of Seoul's Han River Business Bureau, told Aju Business Daily. Lee added that citizens in Seoul have continuously filed complaints about the lack of docks.

Although water sports require more time and commitment than other hobbies, demands for water sports infrastructure are increasing in South Korea. South Korea has unveiled a set of measures designed to boost the country's marine leisure industry that included measures to raise the number of leisure yachts and boats to over 30,000 in 2020 from about 13,000 in 2015. Data released by the country's ocean ministry showed that the number of registered water sports boats such as yachts increased from about 11,000 in 2014 to about 22,000 in 2018. In 2017, the maritime ministry estimated that about 95,000 people occasionally enjoy water sports as hobbies.

"We will create an integrated water sports center at Nanji Hangang Park, which lacked water sports infrastructure, to revitalize the sports in the city," said Hwang In-sik, head of Seoul's riverside parks management. Han River, one of South Korea's major rivers, is 494 kilometers (307 miles) long. The river that is about 1 kilometer wide starts in the eastern Gangwon province to pass through the central part of the Korean Peninsula and flows into the Yellow Sea.