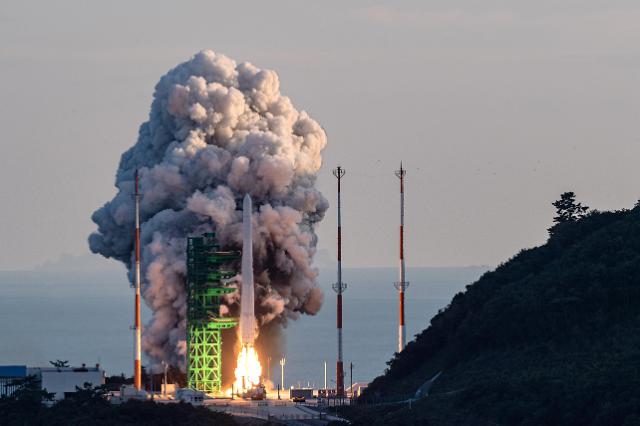 SEOUL -- 10… 9… 8… The countdown for the launching of the Korea Space Launch Vehicle-2 (KSLV-2), known as "Nuri" rocket, started at a rocket launch site located in Goheung some 330 kilometers (205 miles) south of Seoul at 5 p.m. (0800 GMT) on October 21. Hundreds of thousands of South Koreans watched the countdown through a live feed broadcast through YouTube channels operated by South Korean broadcasters.

"Nuri" is a three-stage rocket equipped with a 300 ton-class propulsion system. Unlike its predecessors, the rocket was made solely using domestically-developed technologies. During the broadcast, reporters repeatedly stressed that the success rate of the first rocket launch attempt was about 27 percent and it would be perfectly okay even if the launch fails. Viewers left comments, praying for the success of South Korea's first homegrown rocket.

4… 3… 2… 1… When the countdown finished, the rocket started its engines and shot out a huge volume of steam, dust, and flames into the air. Leaving a tower of clouds, Nuri accelerated upright into the sky. YouTube chat rooms were filled with viewers' applause. Many have praised and congratulated scientists who took part in a 12-year rocket development project.

It took about 16 minutes for the South Korean rocket to move up to the target altitude of about 700 kilometers where it released a 1.5-ton satellite dummy. The dummy, which weighs the same as a real small-sized satellite, was equipped with basic communication devices, just powerful enough to let the rocket's control tower know that the launch was successful.

While the mission looked successful, South Koreans waited anxiously for about 30 minutes until the Ministry of Science and ICT provide official debriefing of the rocket mission. President Moon Jae-in personally delivered an official mission report. "I feel proud. I am sad to say that the launch of Nuri was not perfect but its first mission was a great achievement," the president said during a press briefing held at the Goheung space center, adding: "the rocket succeeded in reaching its target altitude but we now have a have to solve a homework of successfully releasing a dummy satellite into orbit."

However, the president praised scientists and officials who played their role in South Korea's first homegrown space program. "The result of sending a rocket into space is a great achievement. We have come this far after 12 years since the project was launched," Moon said. "If we upgrade parts which we lacked today, I believe that the second launch scheduled in May 2022 will definitely be a success," the president said.

The first launch of the homemade Nuri has put South Korea among the ranks of countries that can develop a rocket capable of carrying more than one ton of payload into orbit. It took South Korean scientists 11 years and seven months to develop a rocket using domestic technology after countries such as the United States, Russia, France, Japan, China, and India. Now, scientists will have to work on technologies required to put a satellite into orbit.

Nuri, which heralded a full-fledged start of South Korea's space program, was developed by the state-run Korea Aerospace Research Institute (KARI) using more than 370,000 parts. It was designed to carry a 1.5 ton-class satellite into 600 to 800 kilometers of orbit. On its first launch, the rocket reached the target altitude of 700 kilometers but it failed to release a dummy satellite into orbit.

Encouraged by the launch of the homegrown rocket, South Korea will push for a policy shift to nurture the country's space industry led by private companies and organizations. From 2022 to 2027, Seoul will spend some 680 billion won ($577 million) to launch four Nuri rockets in an effort to establish a self-sustainable space research ecosystem and incubate companies such as the United States' Space X and Blue Origin that use reusable rockets to send people and satellites to space.

Data and know-how of Nuri's propulsion system will later be transferred to private companies for the development of solid-propellant boosters and other aerospace technologies. Solid-propellant engines are much simpler in design and more reliable than liquid-propellant systems. It is more cost-effective to use solid-fuel rockets to send small-sized satellites into orbit.