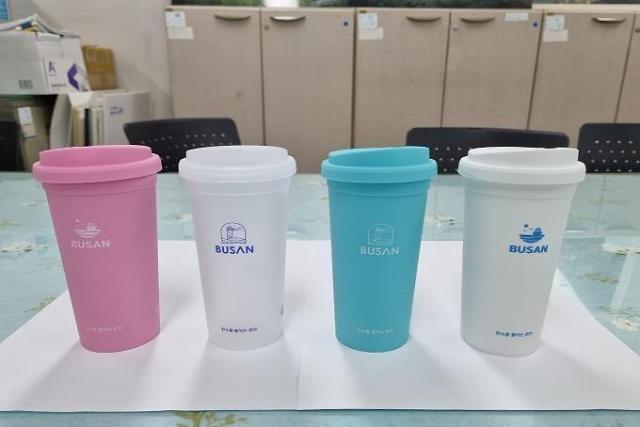 SEOUL -- To reduce the use of disposable cups made of plastics at coffee shops, a pilot project designed to promote the use of eco-friendly cups will be conducted in the southern port city of Busan. The multi-use cups made of renewable materials will be collected and cleaned by a reusable cup cleaning company.

The test operation of multi-use cups will start in Busan on October 26, the port city government said in a statement. Each reusable cup will have a QR code so that customers can use the square-shaped barcode to receive deposit money of 2,000 won ($1.7) when they return their cups to collection boxes. The pilot project is designed to encourage Busan City Hall employees to use reusable cups when they visit nearby coffee shops. The city plans to expand the project to major tourist spots and areas where companies are concentrated.

According to data released by Statista, a global market research company, the number of coffee shops in South Korea reached about 76,150 in 2019. Busan's data showed that the number of disposable cups used annually in South Korea increased six times in 11 years from 420 million in 2007 to 2.5 billion in 2018. The city estimated that about 160 million cups are used annually in Busan.

Coffee shops in South Korea were ordered to provide mug cups or reusable cups for customers drinking inside in 2018. To reduce the use of disposable products including packaging by 35 percent by 2022, the government started regulating the use of paper cups at coffee shops in 2021. Plastic bags will not be available in bakeries and convenience stores starting in 2022.

The average daily amount of plastic waste generated in the first half of 2020 was about 850 tons, according to data released by South Korea's environmental ministry. In May 2018, the environmental ministry signed an agreement with 15 coffee shops including Starbucks to encourage the use of multi-use cups. As a result, the number of consumers using personal cups doubled at Starbucks that offered a 300 won discount.