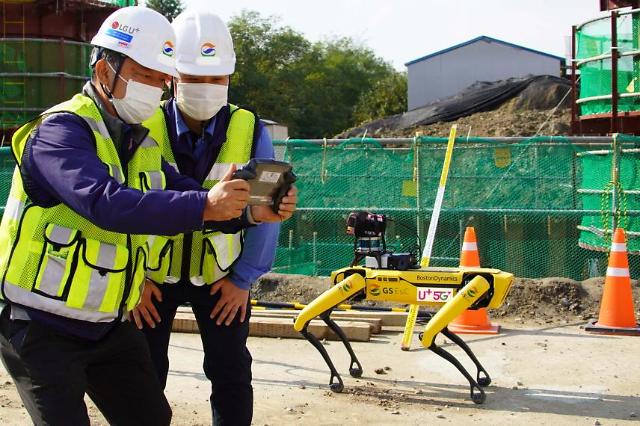 
SEOUL -- LG Uplus, a mobile carrier in South Korea, has teamed with a domestic builder to demonstrate a remote control robot equipped with 5G routers and a 3D laser scanner that filmed narrow passages that could not be accessed by humans at a road construction site. The robot was based on Spot, a four-legged robot developed by Boston Dynamics acquired by South Korea's Hyundai auto group.

The demonstration took place at a road construction site in Siheung, a coastal city southwest of Seoul. An operator watched videos sent by the robot at his field office to move it. Images sent by the robot were used to produce a 3D map of the construction site. Previously, Wi-Fi has been used only for experiments because of unstable communication when a robot enters deep underground.

"We confirmed through this demonstration that robots connected to 5G can play a role enough as workers at construction sites," LGU+'s smart infrastructure business head Suh Jae-yong said in a statement on October 25. "LGU+ will try to create an efficient and safe workplace by investing not only in construction sites but also in various industrial sites such as smart factories and ports."

LGU+ confirmed that it can allocate fixed IPs to 5G routers and control the robot without restrictions on routes. The company said it would put the robot installed with IoT sensors into various industrial sites to detect factory emissions in real-time by installing a gas detection sensor and to monitor body temperature or fire with a thermal imaging camera.

Four-legged robots are being developed by global robot makers and tech companies for their versatility. GS Engineering & Construction has used Spot to collect data at construction sites. In May 2021, POSCO E&C deployed a legged robot based on Spot at its tunnel construction site to check for cracks and construction errors that could cause disastrous accidents. The autonomous robot was jointly tweaked to equip high-performance cameras and a LiDar system that measures distance by illuminating the target with laser light.