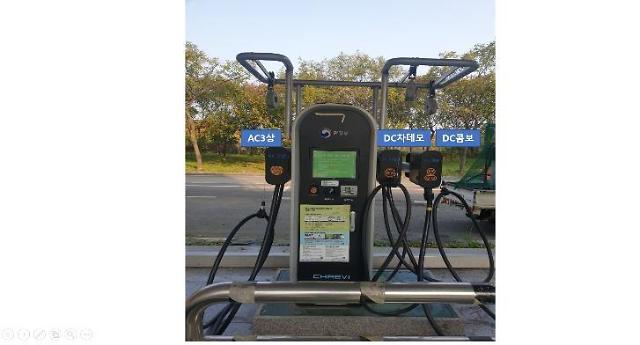 [Courtesy of the Ministry of Environment]

Data released by the environment ministry showed that there are some 10,830 public and private rapid chargers for electric vehicles (EVs) in South Korea as of August 2021. In January, about 135,000 EVs were registered in Seoul. However, many rapid chargers were left inoperable mainly because of the discontinuation of repair parts.

The Ministry of Environment said in a statement on October 26 that 128 outdated public rapid chargers will be replaced and 80 of them will be discarded. The ministry will adopt three charging methods: DC Combo, DC Chademo, and AC 3. DC Combo is the standard charging method in South Korea, most regions in Europe and the United States. DC Chademo method, developed in Japan, was used in South Korea until 2017 before DC Combo was standardized. AC3 is used for both rapid and slow charging. The method was adopted by early EV models such as Chevrolet Spark and Nissan LEAF.

The overhaul of South Korea's outdated public rapid charger infrastructure will be completed by April 2022, the ministry said, adding that the failure rate of chargers is around 1 percent due to the effective failure report incentive system. The ministry encourages citizens to report charger problems by offering 1,000 points per case. Points can be used like cash when charging vehicles. If a problem is reported, the problematic charger will be repaired within seven days. Since July 2020, the ministry has been monitoring the status of EV chargers through a website launched to communicate with EV drivers.

"We will expand the charging methods to reduce inconvenience for drivers during the replacement of outdated public rapid chargers," Kim Seung-hee, the environmental ministry's official, was quoted as saying.