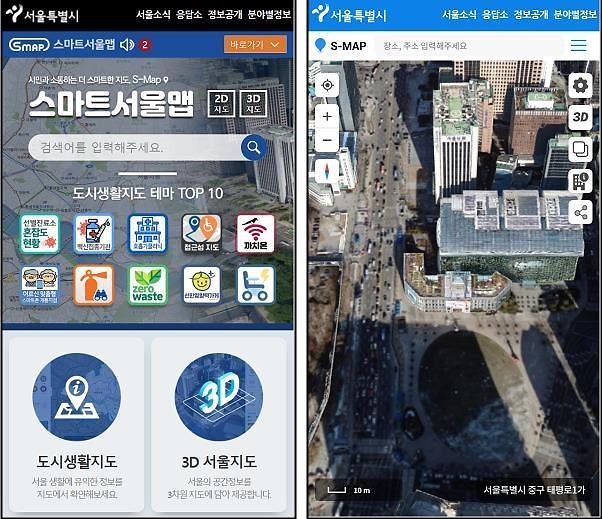 SEOUL -- Seoul City has unveiled a mobile version of a three-dimensional map that duplicates the entire city in a virtual space. The mobile map will deliver the city's various information including real-time traffic conditions and real estate information to citizens anytime, anywhere.

"Digital Twin S-Map," the mobile version of Seoul's digital twin, was released on October 27, Seoul said in a statement. Real-time information released by the digital map can solve various urban situations such as traffic congestions. Through the map, users can explore various parts of Seoul and look inside buildings as if they are riding a helicopter. Seoul has previously released "S-map," the PC version of the digital map in April 2021. The mobile version will provide the same information through smartphones and tablet PCs.

A digital twin is a virtual clone of an object or an infrastructure. Digital twins are frequently used as testing grounds for new technologies or other elements to see what kinds of results they might bring by simulating situations that may occur in real life. SK Telecom (SKT), a mobile carrier in South Korea, teamed up with Korea Hydro & Nuclear Power (KHNP), a state nuclear power plant operator, to create digital twins of nuclear power plants in 2019. Data collected by the virtual clones will be used to improve the energy efficiency and durability of power plants.

Seoul is also planning to roll out the "4D Cultural Heritage" service that reproduces lost cultural assets including Sajikdan, a ceremonial altar for an abundant harvest during the Joseon Dynasty (1392 - 1897), so that users can explore historical spots with virtual characters in the mobile version. The digital twin mobile map is available on the website of "Seoul Smart App" and "S-Map."