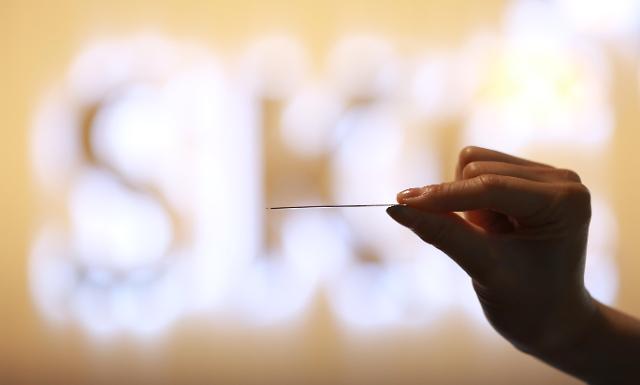 
SEOUL -- There is a growing need for glass as a carrier substrate in the packaging process of semiconductors as glass substrates for high-performance computing can increase the performance and power efficiency of computer chipsets. SKC, a chemical material unit of South Korea's SK Group, bets on glass-based substrates with a rosy outlook that it would be a game-changer.

Glass substrates are future materials that are considered "a game-changer" in semiconductor packaging as they can significantly increase the performance and power efficiency of computer chipsets, SKC said in a statement on October 28 after its board endorsed $80 million for an initial investment to build a related plant in Covington, Georgia.

SKC vowed to complete its glass substrate plant in 2023 and invest more for facility expansion, saying the semiconductor packaging market for high-performance computing is rapidly growing due to a surge in data throughput such as artificial intelligence and data center servers.

"SKC's glass substrate is receiving great attention from the global semiconductor material industry and semiconductor manufacturers as a breakthrough packaging technology that enables the maximum performance chip designers ideally think of," an unnamed SKC official was quoted as saying.

SKC said its glass substrate for high-performance computing is expected to change the landscape of semiconductor packaging because it is suitable for mobile products, requires no intermediate substrates, and can reduce power consumption.

Semiconductors such as central processing units (CPUs) and graphic processing units (GPUs) are packaged into one component on the substrate and connected to the printed circuit board. Plastic substrates showed limitations for high-performance semiconductor packaging due to uneven surfaces. Silicon was used as an intermediate substrate, but it has a disadvantage due to thickness and high power consumption.

SKC said its glass substrate has a smooth surface and can make large-scale square panels. "Our new technology will be key in enabling utmost performance with minimal power consumptions for high-performance computing, as well as for high-speed communication applications, and this technology is scalable for many other technology needs," Kim Sung-jin, director of SKC's new business development, said in a statement posted on the website of the Georgia state government.

Georgia will be a basecamp for SKC’s AI and high-speed data center semiconductor applications, said Kim who played a role in developing glass substrate technology while serving as an electrical and computer engineering professor at the Georgia Institute of Technology. The glass substrate plant received a cordial welcome from Georgia Governor Brian Kemp, who said that SKC and partners would invest at least $473 million for a new plant in Covington.

The new investment came after SKC, a leading polyester film producer in South Korea, proposed a change in its business structure to focus on materials for semiconductors and secondary batteries. On an investor day on September 24, SKC CEO Lee Wang-jae said that his company would seek cooperation with global companies in the fields of silicon anodes and high-nickel cathodes while beefing up the production of high-quality thin copper foils for lithium-ion batteries through its subsidiary and the production of glass substrates.

SK Group has stepped up its pre-emptive investment in semiconductor materials. In 2021, SKC completed preparations for the mass production of high-end mask blanks, which are essential in the production of semiconductor chips. The mask blank is a substrate for photomasks, an opaque glass plate with holes or transparencies that allow light to shine through in a defined pattern.