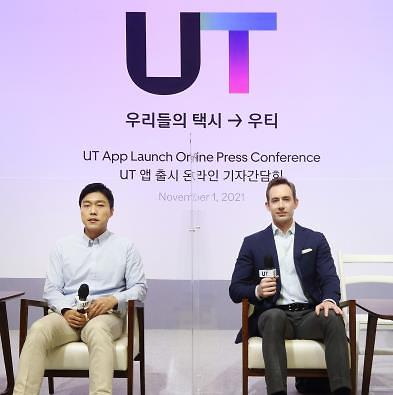 UT said during a press conference on November 1 that the existing Uber app has been integrated with the UT app. Passengers can use UT services in South Korea and use the same app for other local ride-hailing services when traveling abroad. Through the app, South Korean consumers can use both the taxi-hailing service and Uber's ride-hailing service. The UT app can automatically translate messages so anyone can use the app without language barriers. The company will increase the number of franchise taxis to 20,000 by 2022.

UT also plans to adopt a preset payment system that will calculate a fee before departure based on a customer's destination. The customer can pay the preset fee regardless of the actual time he or she spent on the taxi. However, the fee could be recalculated if unexpected situations such as a traffic jam caused by an accident occur.

Uber introduced a car-sharing service in Seoul in 2013 but suspended it two years later due to strong protests by taxi drivers. In 2016, Uber launched its premium taxi service, Uber Black, in Seoul, by hiring existing taxi drivers who operate their own vehicles and letting them pick up riders using Uber's mobile app.