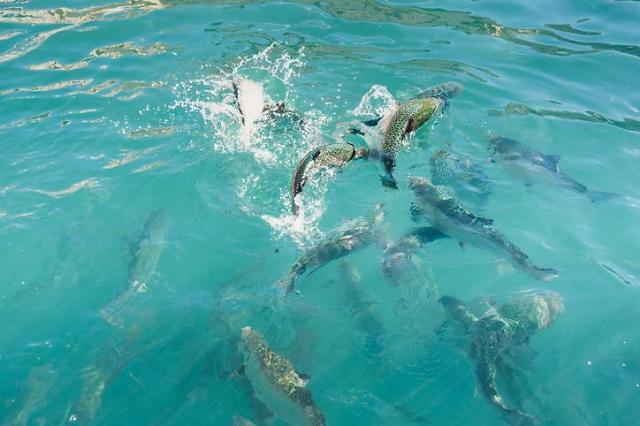 SEOUL -- A Norwegian salmon supplier will provide technical support for an eco-friendly smart aquaculture cluster that will be built in South Korea's southeastern port city of Pohang. The cluster will be equipped with recycling facilities to purify and reuse water in farming as well as advanced technologies that measure information related to breeding and deliver it to artificial intelligence through communication devices.

Pohang City said it has signed an investment agreement with Niels Willickson, a major salmon aquaculture company in Northway, for its project to build a cluster of test facilities, fish farms, processing facilities, and feed factories. Some 40 billion won ($34 million) will be spent by 2024 on developing mass farming technology through technical cooperation and scientific and standardized breeding methods.

The cluster will have recycling facilities to purify and reuse water in farming. "We hope that by establishing a practical cooperative system, Atlantic salmon farmed in Pohang will be exported not only to South Korea but also to the world at an early date," said Pohang Mayor Lee Kang-deok.

The project in Pohang came after the central government unveiled a 178.1 billion won state project in October to localize salmon aquafarming techniques and build three aquaculture facilities. The world's annual production of Atlantic salmon stands at up to 2.6 million tons and some 80 percent has been produced in Norway and Chile. South Korea imports more than 40,000 tons of Atlantic salmon every year.

In an effort to reform South Korea's outdated agriculture industry, the government has introduced automation-related technologies to promote smart farming. It is now common to see young farmers using AI and big data to increase profit, but the aquafarming industry has been slow to adopt digital transformation.