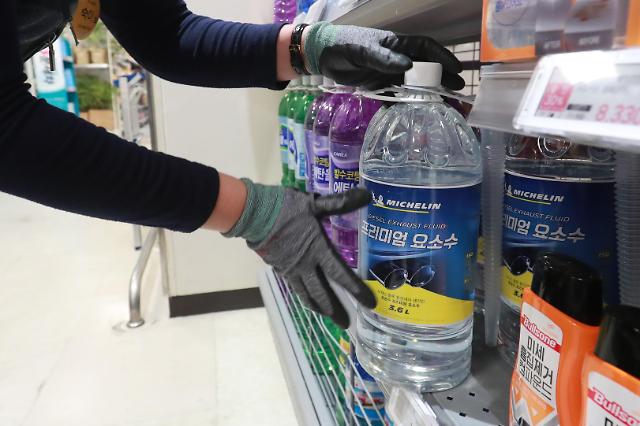 SEOUL -- South Korea's presidential office launched a special task force to cope with a crippling shortage of Chinese raw materials that threatened to spark a logistics crisis as many cargo trucks run short of an aqueous urea solution used to cut pollution created by diesel engines. Urea can be made by adding carbon dioxide to ammonia. South Korea relies heavily on imports, with 97 percent of them coming from China.

Out of about ten million vehicles installed with diesel engines in South Korea, about four million sedans, sport utility vehicles and trucks are subject to European emission standards and use a diesel exhaust fluid (DEF) made with 32.5 percent urea and 67.5 percent deionized water. DEF is consumed in selective catalytic reduction (SCR) that reduces the amount of nitrogen oxides (NOx), which are harmful pollutants, in diesel exhaust emissions.

The office of President Moon Jae-in formed a task force led by An Il-hwan, the senior presidential secretary for economic affairs, on November 5 to monitory the supply and demand of DEF and make comprehensive use of various channels such as diplomatic consultations with China and cooperation with the domestic logistics industry.

Prime Minister Kim Boo-kyum said in a parliament committee that the government would try and find ways to diversity imports and import urea from Middle Eastern countries. "I understand that (the government) is trying to find diversified import destinations in Middle Eastern and other countries," he said, adding Seoul has asked Beijing to speed up customs clearance on products stored in the pier for quarantine.