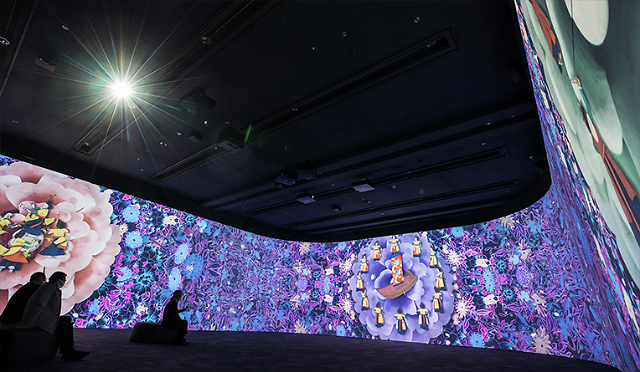 SEOUL -- South Korea's culture ministry has set out to attract Hallyu (the Korean cultural wave) fans in Hong Kong and Russia by holding exhibitions that feature realistic digital content recreations of K-pop, K-film and K-drama including an online concert of K-pop phenomenon BTS and "Parasite," an Oscar-winning film directed by Bong Joon-ho.

Through the Hallyu exhibition called "Korea: Cubically Imagined," 17 kinds of realistic content recreated with scenes from popular South Korean films and dramas including Parasite and "Hotel Del Luna," a fantasy romance TV drama starring singer IU, will be presented. The exhibition will be held in Hong Kong from November 5 until November 25 and in Moscow from November 12 until December 3.

The virtual reality (VR) recreation of Parasite will offer a first-person view of the secretive basement underneath the mansion where the main story of the film is portrayed. Extended reality (XR) and VR technologies will be used to create a cube-shaped space built with light-emitting diode (LED) walls to play "BTS Map of the Soul ON:E," an online concert that attracted more than 990,000 fans in 2020. The culture ministry said that fans will feel as if the seven-member band is exclusively performing for them. XR technology refers to all digital environments created using VR, augmented reality (AR) and mixed reality (MR). XR content is usually provided through head-mounted display devices.

The first exhibition of Korea: Cubically Imagined took place in Paris, France in July 2021. Despite the spread of a coronavirus, about 10,000 people visited the exhibition which was held at UNESCO headquarters and the Korean Cultural Center located in France's capital city.