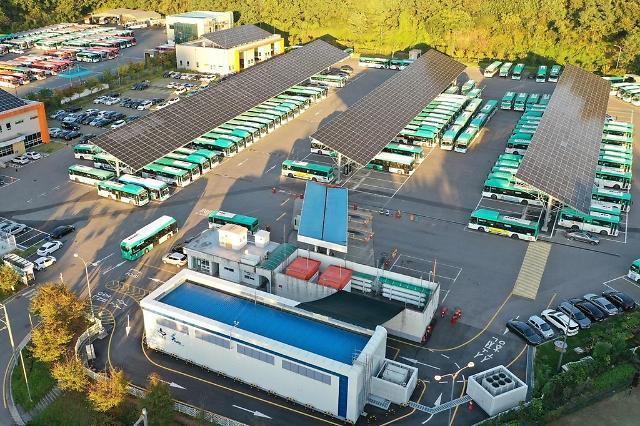 SEOUL -- Through a 2.8 billion won ($2.37 million) project, South Korea's first comprehensive eco-friendly public-purpose energy complex that features both electric vehicle chargers and a solar power plant was built in Suwon some 34 kilometers (21 miles) south of Seoul. The old garage was changed into a new facility with 24 electric bus chargers and large solar panels that work as rain shields for parked vehicles.

"In the era of carbon neutrality, Suwon has taken another step toward a leading city for energy conversion," Suwon Mayor Yeom Tae-young was quoted as saying. In March 2021, Suwon also built a hydrogen charging station with a daily charging capacity of 250 kilograms.

To reduce the dependency on fossil fuels, South Korea has accelerated the adoption of electric and hydrogen buses. In October 2021, six electric double-decker buses started their operation on a bus route from Gimpo, a western satellite city of Seoul, to Gangnam, a southern business district, through a 6 billion won state project. According to South Korea's transport ministry, a total of 40 electric double-decker buses will be deployed to Seoul's satellite cities by the end of 2021. As of September 2021, South Korea has some 2,122 electric buses.