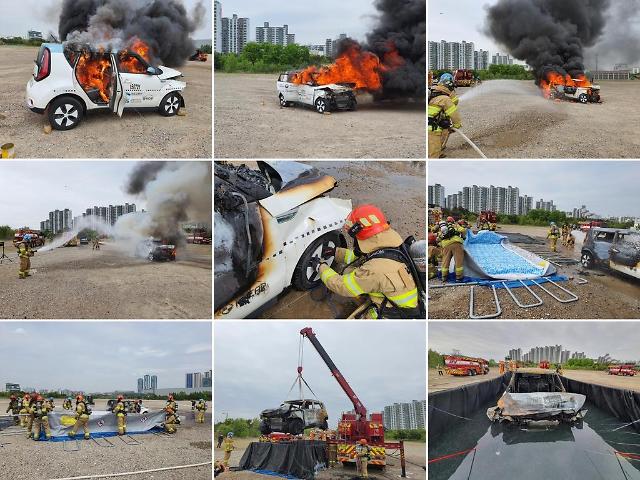 Battery fires have been reported in South Korea with some one million battery-powered vehicles including hybrid vehicles and hydrogen fuel cell vehicles. According to the National Fire Agency, 69 battery fires were reported from 2017 to 2022, with 58 percent caused by electrical problems.

In its emergency guidebook, the world's top EV maker Tesla prompts first responders to apply up to 8,000 gallons (30,283 liters) of water directly to a car's battery to cool it down. The carmaker stresses that the company does not recommend placing the vehicle in a large tank of water, but countries like the United States and Germany dip burning cars into water tanks instead of dousing water.

The Seoul Metropolitan Fire Academy said in a statement on November 10 that fire cadets practiced putting out an EV fire at a public car park in Chungju some 100 kilometers (62.1 miles) southeast of Seoul using a portable water tank. It took about seven minutes for four cadets to assemble the tank and about 15 minutes to fill it up with 6,000 liters of water.

The tank was specially designed and developed through a joint project involving the state-run Korea Fire Institute and Kfire, a domestic firefighting equipment maker. The fire academy also used a large-sized fire blanket or special fire-extinguishing chemicals to put out EV fires.
"The results of this drill will be used as data for the development of fire-suppressing techniques for EV fires and the standardization of portable water tanks," Seoul fire academy's principal Sung Ho-seon was quoted as saying.