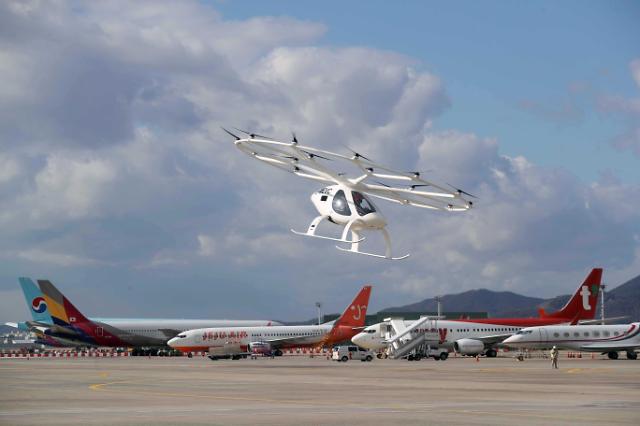 
SEOUL -- A two-seater multirotor personal air vehicle from Volocopter, a German aircraft manufacturer specializing in the design of electric multirotor helicopters for air taxi use, was mobilized for a government event to see how air transportation and urban air mobility can coexist at crowded airports.

After a three-minute flight of about three kilometers (1.86 miles) at a speed of 48km per hour in a designated corridor, the Volocopter flying vehicle landed safely onto a takeoff place at Gimpo Airport located in the western end of Seoul, watched by government officials and members of Urban Air Mobility Team Korea, a public-private consultative body that aims to commercialize drone taxis in 2025.

Urban air mobility (UAM) is an ecosystem covering personal air vehicles and infrastructure such as a new navigation system, take-off and landing fields and charging technologies. South Korea aims to commercialize manned drone taxis in 2025. Remote-controlled vehicles will be adopted in 2030 and a fully autonomous service in 2035. A safety manager will board each flying vehicle until pilots are no longer needed.

"The future that could only be imagined in movies and dreams in the past has come true," Land, Infrastructure and Transport Minister Noh Hyeong-ouk said after watching the test flight aimed at establishing an integrated information-sharing system that can safely control UAMs at airports as well as a service that allows customers to use airport facilities and transfer conveniently to other means of transportation.

The demonstration underlines South Korea's active campaign to commercialize a UAM service ahead of other countries. "Air taxis flying in the sky of the city center will change the paradigm of time, space, and movement," Noh said, calling for careful preparation in establishing infrastructure such as vertiports, which are a vertical takeoff and landing site for flying vehicles.

Korea Airport Corporation (KAC), the operator of airports, showcased a vertiport model installed with quick security search equipment to reduce passengers' waiting time. "It will be the first time in South Korea that a UAM vertiport for taking off and landing has been actually envisioned," said KAC CEO Son Chang-wan. The actual facility where five UAM aircraft can use at the same time will be built near Gimpo Airport, along with charging and maintenance facilities.

The event on November 11 showed the process of passengers using UAM by setting up virtual UAM operators, traffic management service providers, and vertiport operators. Passengers can designate a destination through mobile applications, receive a quick security search and board an air taxi.

Video tracking equipment automatically detected and tracked the flight and the pilot made video calls to the ground control center using a mobile communication network built by SK Telecom (SKT), a leading mobile carrier in South Korea. "Based on SKT's advanced telecommunication digital infrastructure, we will play a key role in the development of the UAM industry to reduce social costs caused by traffic congestion," said SKT CEO Ryu Young-sang.

The state-run Korea Aerospace Research Institute (KARI) is working on a five-seater optionally piloted personal aerial vehicle (OPPAV), equipped with four fixed and four tilted lift propellers, that can fly up to 120 km at a maximum speed of 340 km.

Air taxis will fly through corridors, or known as virtual channels in low altitude airspaces, to prevent accidents and improve the safety of pedestrians on the land. Fixed corridors will be operated during the early phase of UAM operation, while a dynamic corridor network will be established later. Vertiports will be placed in safe places like rooftops.

Noh's office has released a concept of operations (ConOps) that specified step-by-step guidelines and checkpoints for UAM service operators to establish business models and take responsible actions during normal and emergency situations. Operational scenarios were set in abnormal situations.