Wave power plant to be demonstrated at southern resort island 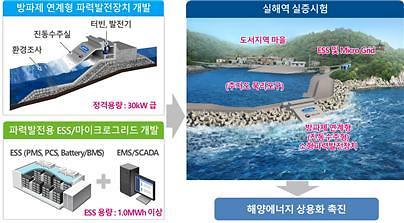 [Courtesy of the Ministry of Oceans and Fisheries ]

SEOUL --  South Korea will demonstrate a wave power plant at the southern resort island of Jeju. Unlike other renewable energy sources like wind and sunlight, ocean waves can generate electricity 24 hours a day.

Wave power plants harvest electricity using the power of waves. The up-and-down motions of ocean waves are turned into continuous mechanical motions that move the turbine to generate electricity. Wave power plants use air pressure to move its turbine even during low tide.

The Ministry of Oceans and Fisheries said in a statement on November 15 that the maritime ministry has finished the construction of a wave farm in Jeju. The 30 kilowatt-class power plant was built on a breakwater to ensure the continuous generation of electricity. The prototype plant using localized parts will be demonstrated until 2027.

According to the ministry, the wave farm was designed as a small-sized plant with expandability. Multiple plat units can be concentrated in an area where a lot of electricity is needed. The Jeju demonstration plant will be hooked onto an energy storage system (ESS) device where power is stored and distributed to a local power grid.

The maritime ministry predicted that when the demonstration is finished in 2027, the domestic wave farm technology will be upgraded for actual deployment. Some 25 wave plants will be built around South Korea after the demonstration.

"The construction of this wave power plant has a great meaning as it heralds the beginning of an era in which electricity is generated using waves. We will upgrade this power generation technology so that such a power generation method can be popularized," the ministry's marine development bureau head Koo Do-hyung was quoted as saying.