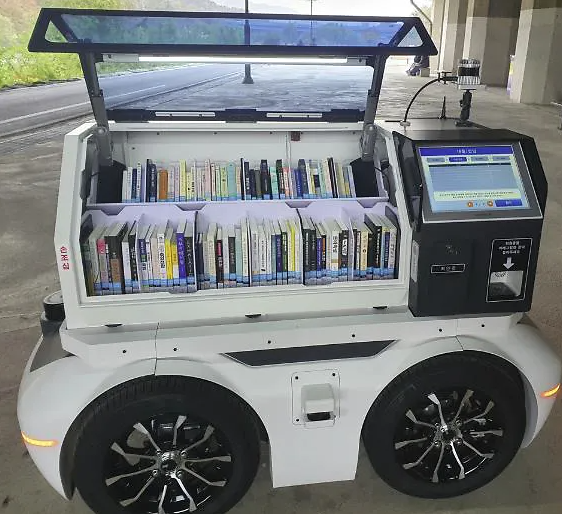 [Courtesy of the Korea Chamber of Commerce and Industry]

SEOUL -- To provide a pleasant break time for citizens exhausted by hectic urban life, an autonomous librarian robot that can carry some 100 books will be tested at a riverside park in Seongnam, a southeastern satellite city of Seoul. The smart librarian robot will roam around walking tracks and lend books to visitors.

Seongnam said in a statement on November 16 the smart librarian robot equipped with light detection and ranging (LiDAR) sensors will be demonstrated in December 2020. The autonomous librarian robot that is about 1.8 meters long will also use global positioning system (GPS) signals to find its whereabouts. A LiDAR sensor uses laser beams to measure the distance between the sensor and its target object. The demonstration of the librarian robot received a green light from South Korea's trade ministry to be exempted from regulations on November 15, 2021.

Through the demonstration scheduled to start on November 19, the librarian robot will travel back and forth on a 180-meter-long walking track in Tancheon riverside park. Citizens use the riverside park to walk, exercise and enjoy the rural atmosphere in the city. A person who has Seongnam Public Library's membership card can borrow two books at a time. Books have to be returned to retrieval boxes installed on the park's walking track within two weeks.

Various companies including Naver Labs, the robot and autonomous technology wing of South Korea's top web portal operator Naver, participated in the development of the librarian robot. In 2017, Naver Labs developed "Aircart," a robot handcart that helps people carry heavy objects. The robot handcart detects the movements of operators with sensors installed in its handle. "We plan to operate the robot in other regions after completing the demonstration. The official service will start in March 2022," an unnamed Seongnam official was quoted as saying.