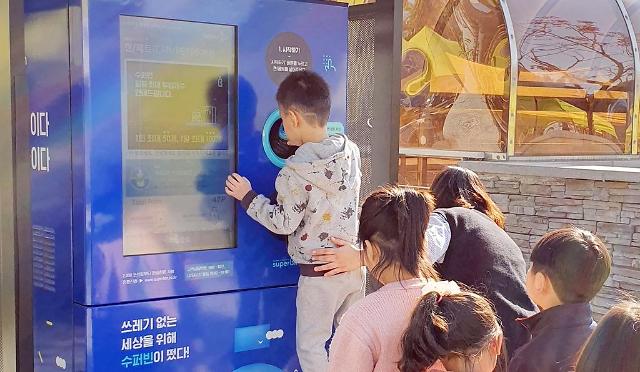 SEOUL -- Automatic can and plastic bottle retrieval machines gained huge popularity among citizens of Chuncheon City located east of Seoul. The usage rate of recycling machines increased by more than 40 times in 2021 compared to 2019. The machines attracted citizens by offering reward points that can be used like cash.

According to Chuncheon, 32,257 kilograms of cans and 40,195 kilograms of transparent plastic bottles were collected through 14 automatic recyclable waste retrieval machines from November 1 to November 17. The retrieval machines called "Nephron" have been used about 20,000 times since they were first installed in 2019. Some 59 million won ($50,000) was returned as cash-like points. "We will continue to operate the recyclable waste retrieval machines to promote resource circulation and separate discharge of wastes," an unnamed Chuncheon official was quoted as saying.

Data released by South Korea's environment ministry showed that the rate of domestic plastic bottle recycling was 82.3 percent in 2019. The ministry is currently focusing on the popularization of pyrolysis processing to convert recycled plastics to oil. Recycled oil is often used as fuel or produced as core materials for lubricants. The government plans to increase the conversion rate, which is about 0.1 percent as of 2021, to up to 10 percent by 2030.