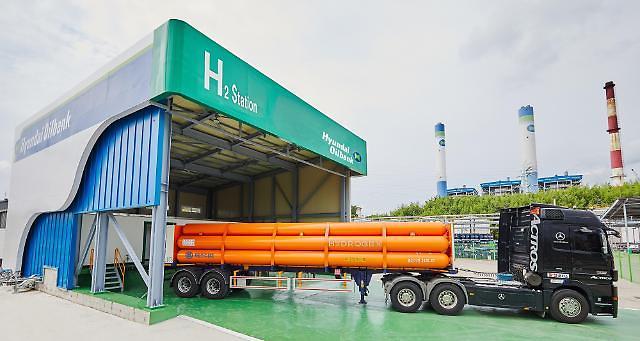 Naphtha is used to dilute heavy crude oil, reduce its viscosity and facilitate transport. From November 18, Hyundai Oilbank injected 100 tons of pyrolysis oil into refining to conduct empirical research, secure safety, and gradually expand the input. The eco-friendly naphtha will be supplied to petrochemical companies.

Pyrolysis is a chemical recycling process that can convert plastics into high-quality oil using extreme heat and pressure. Recycled oil is processed into medium crude and light oil to be used in the production of lubricants and fuels. Previously, pyrolysis oil has not been used as a raw material for the production of petrochemical products due to impurities.

Hyundai Oilbank's research institute is studying ways to produce pyrolysis oil-based petroleum and petrochemical products by improving physical properties and removing impurities. The oil company will acquire certification from international certification agencies such as the International Sustainability and Carbon Certification (ISCC) to sell naphtha made of waste plastic pyrolysis oil as an eco-friendly green product.

In September, SK Innovation became South Korea's first petrochemical company to use waste plastic pyrolysis oil for the production of petrochemical products. SK units have emphasized processing technology to use pyrolysis oil as a raw material for plastic products instead of naphtha.

Pyrolysis recycling is widely researched in South Korea to address concerns about waste plastics. The Ministry of Environment has formed a task force involving research institutes, private companies and academics to popularize pyrolysis recycling. Pyrolysis technology will be used to create synthetic gas (syngas) that can be used as the main material for the production of methanol and ammonia.