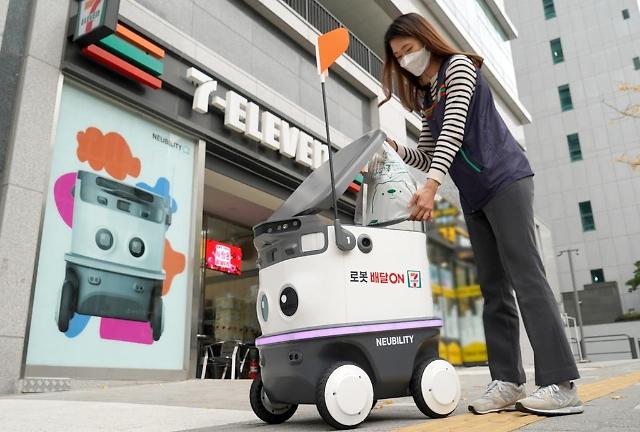 SEOUL -- The South Korean operator of 7-Eleven convenience stores has started the test operation of an autonomous delivery robot in southern Seoul. The robot uses cameras instead of a GPS system to navigate in urban environments even in hard weather conditions such as rain and snow.

Various autonomous robots are being tested in South Korea with a food and grocery delivery market estimated to stand at 23 trillion won ($19.3 billion) to reduce labor costs. Some robots are able to communicate with elevators so that they can call a lift to move up and down floors inside a building. Autonomous drones have been tested in open areas such as parks to deliver food and groceries.

Korea Seven, the operator of 7-Eleven stores, said in a statement on November 22 that a delivery robot was deployed to a store in the southern district of Seoul. 7-Eleven will see how the robot operates in urban environments intertwined with obstacles such as pedestrians and street poles. The robot will cover delivery runs inside a radius of 300 meters (984 feet) from a designated store for three months. The operation area will be expanded in the future.

"Close-range delivery has become one of the iconic services of convenience stores nowadays and we predict that market demands will increase in the future," 7-Eleven's DT innovation division director Choi Byeong-yong was quoted as saying. 7-Eleven's robot was created through a partnership with Neubility, a domestic startup that develops delivery robots using cameras because it is hard to receive satellite positioning data in a concrete jungle.