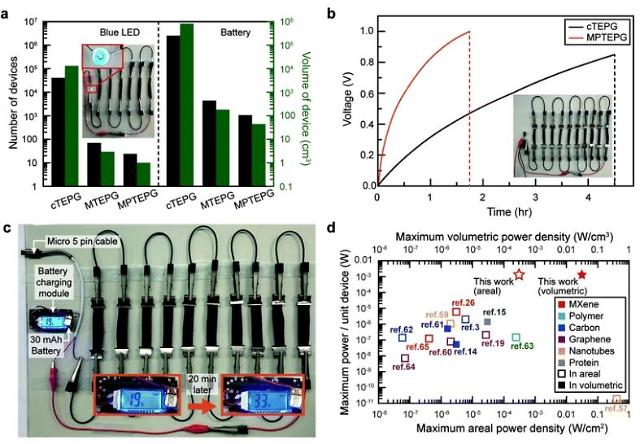 SEOUL -- South Korean researchers have developed an eco-friendly nano-hydroelectric generator that can charge batteries using a droplet of water which is about 50 microliters. Although the device's generating capacity is not high, it can be used in any environment if moisture is collectible. The generator can also be used on wearable devices to use sweat drops to generate power.

The Korea Advanced Institute of Science & Technology (KAIST) said in a statement on November 23 that its research team led by Kim Il-doo has developed a nano-hydroelectric generator that can generate electricity in a simple and renewable way by using nanosheets made of titanium carbide (Ti3C2Tx) MXene to coat cotton fabric.

MXenes are a class of two-dimensional transition metal carbide that has hydrophile properties to trigger a capillary migration of water. The nano-hydroelectric generator developed by KAIST was demonstrated to have 24 times more energy-efficient than conventional nano-generators made of nanocarbon particles. When the titanium carbide MXene was integrated with highly conductive polyaniline, it was about 100 times more efficient than nano carbon-based hydroelectric generators.

"This technology can reuse moisture including droplets of water or sweat that is vaporized into the air as an energy source," head professor Kim Il-doo was quoted as saying.

Through a test, researchers were able to charge up to 14 percent of six piles of serially-connected commercial lithium polymer batteries, each pile made of four battery units (30 milliamp hours, 3.7 volts) in parallel connection, in 20 minutes using about 30 milliliters of water. Researchers said that the nano-hydroelectric generator can be used in wearable devices.