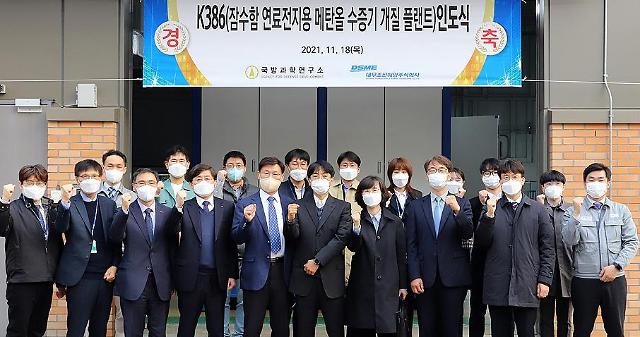 The plant that produces high purity hydrogen through methanol and water was delivered to the Agency for Defense Development (ADD), a defense technology development agency which has developed related technologies to enhance the operational performance of submarines.

DSME said the fuel reforming method using methanol has high storage efficiency and improves the submarine's operation capability. Space efficiency is high and fuel supply is easy. There is no need for separate facilities for recharging and the charging period is short.

Methanol is an inflammable liquid which is emerging as a new clean-burning fuel. Unlike natural gas that requires high pressure and cryogenic temperatures, methanol is easy to store and transport even at room temperature and general atmospheric pressure. One problem with high concentrations of methanol in fuel is that alcohols corrode some metals.