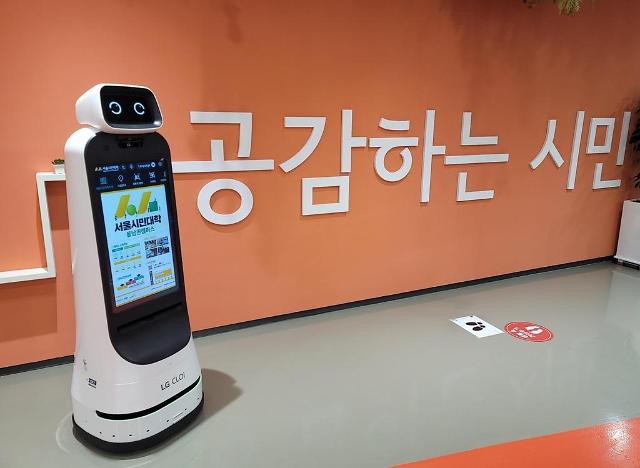 According to Seoul on November 29, a CLOi robot equipped with liquid crystal displays (LCDs) on the front and back of their main body will be used at the city's educational institute for the first time. At the education center, the robot will play the role of docent to guide visitors around the institute. Visitors can start communicating with the robot just by saying "Hey CLOi!"

Starting in the first half of 2022, the autonomous robot will also serve as a teaching assistant at the education center's cultural space designed to offer various reading activities. The robot will provide book-related information every month and help visitors to find books at a library.

Autonomous robots are being utilized in many different fields in South Korea. An autonomous librarian robot is being test-operated in Seongnam, a southeastern satellite city of Seoul. The librarian robot carries about 100 books in a riverside park to provide relaxing break time for citizens. In October 2020, two CLOi robots were deployed at two hospitals to take care of repetitive chores. The robots can carry up to 15 kilograms (33 pounds) in their closet-like compartments. Using their global positioning system (GPS)-based functions, they can travel between floors. CLOi robots have been also used in department stores and exhibition halls.