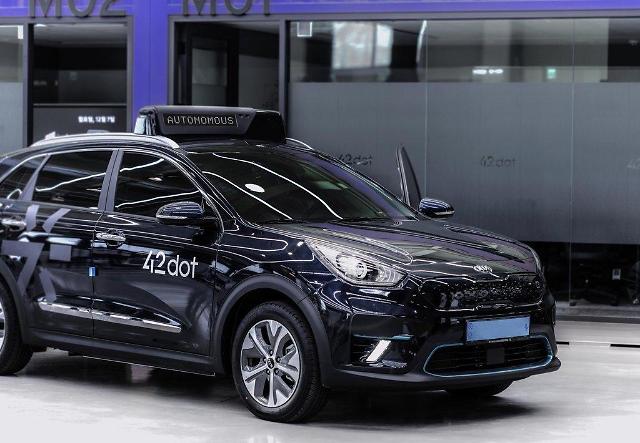 SEOUL -- In an effort to boost the adoption of transport services involving self-driving cars, Seoul Mayor Oh Se-hoon chaired a ceremony to open South Korea's first autonomous vehicle-hailing service in a pilot zone. A full service involving more than 50 autonomous vehicles will be introduced by 2026.

From November 30, three cars will first start carrying passengers. After a month of free operation, paid transportation is to begin in January 2022. By the end of December 2021, Seoul will deploy six autonomous vehicles. Passengers can reserve a vehicle through an app called "TAP!" that can be downloaded from Google Play Store and Apple's App Store.

Oh took the honor of becoming the first passenger to use the autonomous vehicle-hailing service after a ceremony on November 29 in Samganm-dong in western Seoul. An autonomous Kia Niro crossover utility vehicle carried the 60-year-old on a 2.9 kilometer (1.8 miles)-long route.

"I was a little anxious due to psychological tension, but I felt like a skillful driver was driving," Oh told reporters after a trouble-free trial ride. "It was awkward at first, but I thought that commercialization is possible when I saw it skillfully making left and right turns."

Elated with the opening of the first autonomous vehicle-hailing service in Seoul, Oh called for the early commercialization of full self-driving services to catch up with foreign front-runners like Tesla. "In the era of state-of-the-art technology in the 4th Industrial Revolution, where the front runner dominates the market, there was a sense of crisis that we might fall into a second-class country, but the moment has finally come to start a paid urban transportation service."

In Sangam-dong, an area of 6.2 square kilometers located in a well-organized new development district dotted with apartment complexes and modern office buildings along the grid-shaped road structure is one of the country's seven pilot zones which have been designated in seven cities to accelerate the development of autonomous driving technology and mobility services such as self-driving taxi-hailing.

Oh said Seoul would try to operate an urban autonomous bus service and a robotaxi that navigates around places by communicating with on-road structures such as traffic lights and pedestrian crossings and other vehicles. "Self-driving is no longer a technology of the distant future, but it is already by our side."

Because level 4 self-driving vehicles are scheduled to be fully commercialized by 2027, Seoul will build a safe infrastructure that offers traffic information services including real-time traffic signal information. Level 4 autonomous vehicles have cockpits, allowing drivers to take over control if needed. The most promising direction of level 4 is a robotaxi.

In September 2021, Motional, a joint venture between South Korea's Hyundai auto group and Aptiv, a global technology company with advanced mobility solutions, unveiled the basic design of a robotaxi featuring level 4 autonomous driving technologies. The robotaxi is based on IONIQ 5, a new Hyundai crossover utility vehicle.