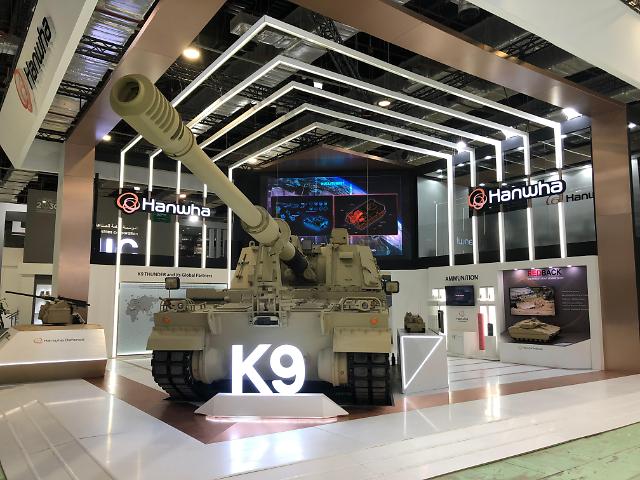 SEOUL -- South Korea's K-9 self-propelled howitzer developed by Hanwha Defense is drawing keen interest from the Egyptian military at an international arms exhibition in Cairo, reflecting its growing popularity overseas and the validated performance of firepower, mobility and armored protection.

The K9 is by far the most popular self-propelled howitzer in the world. About 600 K-9s have been exported to Turkey, India, Poland, Norway, Finland and Estonia. Australia is in final negotiations to adopt K9's Australian version.

K-9's upgraded version, K9A1, is on display at the Egypt Defence Expo (EDEX) 2021 that runs from November 29 to December 2. Hanwha Defense said the Egyptian military is considering acquiring a package of K9s and supporting vehicles. The K9A1 howitzer boasts high-velocity firing and quick displacement for firing support and direct engagement, excellent maneuverability and the ability to concentrate its firepower on select targets.

Equipped with a rotating turret that can traverse through a full 360 degrees, the 47-ton vehicle has a firing range of 40 kilometers (25 miles) and move at a maximum speed of 67 km per hour. It can fire its first round within 30 seconds from a stationary position and within 60 seconds while moving, with a burst rate of fire from six to eight rounds per minute.

"Aligned with the South Korean government's K-defense globalization strategy, we will accelerate efforts to further expand the footprint of South Korea's advanced defense equipment in the global defense market," Hanwha Defense CEO Son Jae-il said in a statement on November 30.

Apart from the K9 howitzer, Hanwha Defense is showcasing a new light-weight version of its remote-controlled weapon station (RCWS) and a next-generation Redback infantry fighting vehicle that can carry up to 11 people at a maximum speed of more than 65 km per hour.

RCWS is a remotely operated weaponized system often equipped with a fire-control system for light and medium-caliber weapons. A Redback variant called AS21 has been shortlisted as a candidate for an Australian military project to replace old armored personnel carriers.