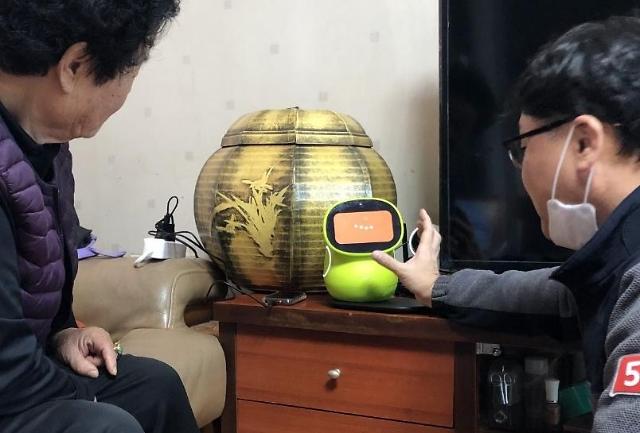 SEOUL -- Artificial intelligence-based care robots were deployed in a rural area with a high suicide rate to look after vulnerable old people. The care robots can communicate with lonely residents with mental health issues and warn guardians and health centers in case of an emergency.

For a pilot project, the provincial government has provided 10 AI-based care robots in Cheongyang County, some 120 kilometers (74 miles) south of Seoul, to take care of single households and those with family members suffering from depression. By analyzing the voices and movements of residents, care robots will contact health care centers and guardians during the daytime if abnormal activities are detected. At night, robots will notify KT's control tower.

Care robots can offer personalized services such as giving quizzes to help prevent dementia, playing relaxing music and notifying their human companions to call back their guardians if there are any unanswered phone calls. "After evaluating the effectiveness of the pilot project, we will expand the AI care robot service to other regions with high suicide rates," Chungnam official Hwang Chim-hyun was quoted as saying.

The number of single-person households is rapidly increasing in South Korea with a population of about 52 million. Some 1.6 million are single households aged 65 and older. Data released by South Korea's welfare ministry showed that the number of lonely deaths skyrocketed from 68 in 2011 to 1,145 in 2019.

Many different technologies have been adopted to prevent lonely death such as Internet of Things (IoT) sensors that can detect temperature, humidity and movements in real-time. As of March 2020, Seoul has deployed 75,000 IoT sensors at the homes of single elderlies.