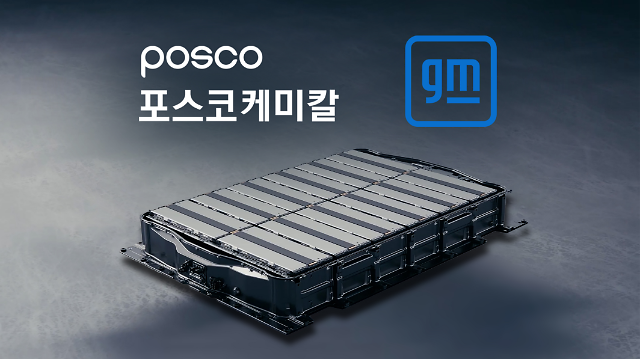 
SEOUL -- POSCO Chemical agreed with General Motors to set up a  joint venture in the United States for the production of high-nickel cathode active materials from 2024 that would be supplied to a battery joint venture between GM and its South Korean partner, LG Energy Solution. Details such as the size of their investment and the location of the plant will be disclosed later.

Battery makers have tried to produce efficient batteries, such as NCM that contains nickel, cobalt and manganese. The proportion of nickel is high so that battery producers can save costs and extend the driving range. An upgraded model called NCMA increases stability by adding aluminum. Cobalt, an expensive rare-earth element widely used in lithium-ion batteries, is vulnerable to sudden price fluctuations. Nickel is cheaper than cobalt.

POSCO Chemical became the first battery material company to form a joint venture for cathode active material with an automobile company in North America. By partnering with global automakers, the South Korean company said it would minimize the risk of large-scale overseas investment and enter the North American market stably.

POSCO Chemical, which was selected as a cathode active material supplier for Ultium Cells in December 2020, is building a plant with an annual capacity of 60,000 tons in South Korea's southern port city of Gwangyang.

POSCO Chemical, a unit of South Korea's top steel group POSCO, is pushing for the production of 220,000 tons of lithium and 100,000 tons of nickel by 2030. Group chairman Choi Jeong-woo has presented the goal of becoming a top player in the global battery material market by completing a value chain.