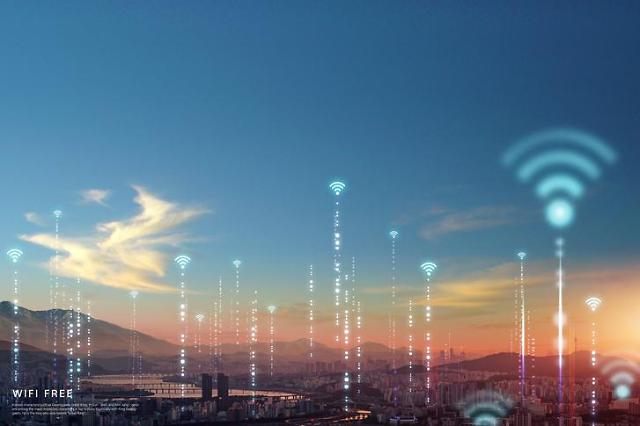 
SEOUL -- WiFi is a popular wireless networking technology that uses radio waves to provide wireless high-speed internet and network connections. Wireless routers provide access to the Internet or private computer networks. Radio waves from 2.4 gigahertz (GHz) to 5 GHz bands have been widely used across the world.

South Korea has tried to lead the commercialization of WiFi 6E, the next-generation standard which means WiFi 6 extended to the 6 GHz band, which brings more bandwidth, faster speeds, and lower latency, opening up resources for future innovations.

In an event hosted by the Ministry of Science and ICT on December 3, WiFi 6E was tested in various ways on the southern resort island of Jeju. An 8K VR real-time streaming service was demonstrated In a virtual reality theme park at a Jeju arboretum. Wi-Fi 6E can provide a more vivid virtual reality experience.

At a high school gymnasium, participants watched a game at the same time through about 100 terminals by using a relay camera and a Wi-Fi 6E router. A university coffee shop introduced a non-face-to-face order service. If a QR code attached to each table is photographed, a mobile phone displays a menu for orders and payment. A Wi-Fi 6E roaming service was tested at an airport.

"Many foreign countries are supplying 6GHz bands through Wi-Fi 6E referring to our policies, and this demonstration seems to be a good example," Choi Woo-hyuk, a senior science ministry official in charge of radio policy, said in a statement. "We will continue to actively review institutional support such as easing output standards to revitalize the market."