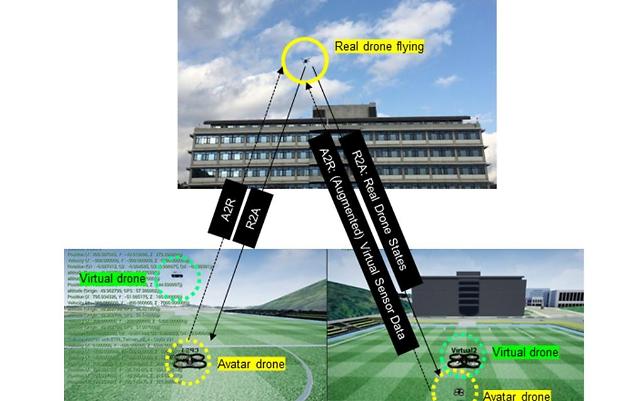 
SEOUL -- For safe and quick research in virtual space, South Korean researchers have developed a simulator capable of testing the process of performing various missions with avatar drones that accurately reflect actual drone characteristics, along with software that can easily control and monitor drones on the ground.

Existing simulators could not test many drones at the same time. Characteristics such as sensors and flight environments could not be accurately reflected. For intelligentized artificial intelligence-based missions, neural networks must be advanced through repetitive reinforcement learning, but it is difficult to secure enough time only with empirical experiments.

The government-funded Electronics and Telecommunications Research Institute (ETRI)  has developed a simulator that can test the process of performing various missions with large-scale unit drones, as well as technology that enables repetitive reinforcement learning using distributed computers to improve the level of AI applied to drones and discover various cluster drone services.

For technology verification, researchers connected server-class computers and laptops to demonstrate the simultaneous operation of 100 virtual drones and accurately reproduce the physical phenomena that occur when virtual drones collaborate and transport heavy objects connected in a line.

The technology of avoiding obstacles with actual drones mounted with a deep autonomous neural network was also verified. "I hope this technology will help accelerate the development of multiple drone missions and services to realize the economy of scale that has been considered to be impossible in the drone industry," Lee Soo-jeon, a senior ETRI researcher, said in a statement on December 9.