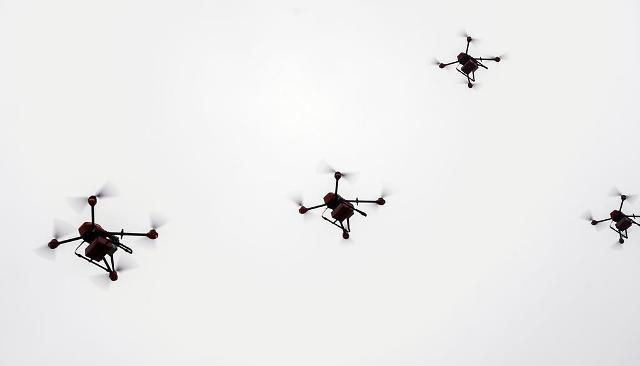 [Courtesy of the Gangwon Information and Culture Promotion Agency]

SEOUL -- The formation flight of delivery drones was showcased for the first time in South Korea at an event to demonstrate various drone technologies used in delivery, disaster control and smart farm management. Five drones flying in formation delivered sandwiches to spectators after making a safe flight across a lake.

Drones, also known as remotely controlled flying robots, were mostly used to replace the dangerous roles of soldiers and rescuers in the early days of their commercial introduction. However, their role has been gradually expanded to other fields such as food and parcel delivery. In August 2021, the central administrative city of Sejong launched a commercial pizza delivery service, allowing citizens to receive pizza using a smartphone app at a lake park.

The demonstration of delivery drones flying in formation was conducted in Chuncheon some 75 kilometers (46.6 miles) northeast of Seoul on December 8 through collaboration with the Gangwon Information and Culture Promotion Agency. "This is the first time in South Korea that the formation flight of multiple drones for parcel delivery has been demonstrated," Choi Boo-yong, an official at the agency's drone business bureau, told Aju Business Daily.

Chuncheon Mayor Lee Jae-soo vowed to step up efforts to popularize drone services, pointing to the city's natural environment. He said a tourism drone service would be introduced when a Lego-themed amusement park opened in May 2022 on a lake island. The city aims to turn the area in and around the park into one of South Korea's leading tourist destinations.

Legoland, a chain of family theme parks, opened the first park in Denmark in 1968, followed by more parks in Japan and other countries. The parks are known for a model village which includes models of global landmarks and scenes made from Lego bricks. Choi said that Chuncheon would later develop manned drone taxis that can carry passengers across the lake.

Chuncheon also showcased drones for underwater surveying, disaster control, smart farm management and group performance. Underwater surveying drones can generate a 3D map of the underwater terrain so that sightseeing boats can travel through safe paths. Smart farm drones can protect crops from pests by analyzing the temperature and humidity. Disaster control drones designed for all weather conditions have the ability to search for lost people.