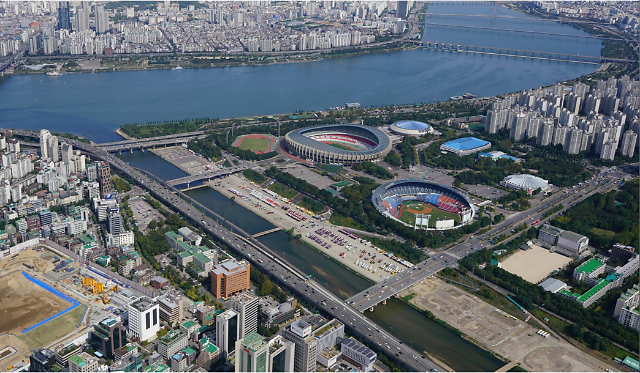 
SEOUL -- A consortium led by Hanwha E&C, a builder affiliated with South Korea's Hanwha Group, was selected as preferred bidder for an engineering project to build a sports, cultural and convention complex together with office buildings, hotels, and commercial facilities in an area encompassing the Jamsil sports center built for the 1988 Olympics in Seoul.

The construction of a sports and MICE complex in Jamsil, a neighborhood of Seoul's southeastern district of Songpa, is to begin in the second half of 2023 on 350,000 square meters of riverside land. Meetings, incentives, conferences and exhibitions (MICE) is a type of tourism in which large groups are brought together. The Seoul city government aims to establish a new landmark by injecting more than two trillion won ($1.7 billion) into the project.

The Hanwha E&C consortium has bolstered its bidding power by attracting Populous, a global architectural and design practice specializing in sports facilities, arenas and convention centers, as well as the planning and design of major special events. Populous has designed many prominent facilities such as Yankee Stadium and Wembley Stadium.

Hanwha E&C has proposed the idea of implementing a smart complex including metaverse and integrated platforms that organically connect performances and exhibitions across virtual and reality, as well as self-driving shuttles and urban air mobility (UAM), which is an ecosystem covering personal air vehicles and infrastructure such as a new navigation system, take-off and landing fields and charging technologies.