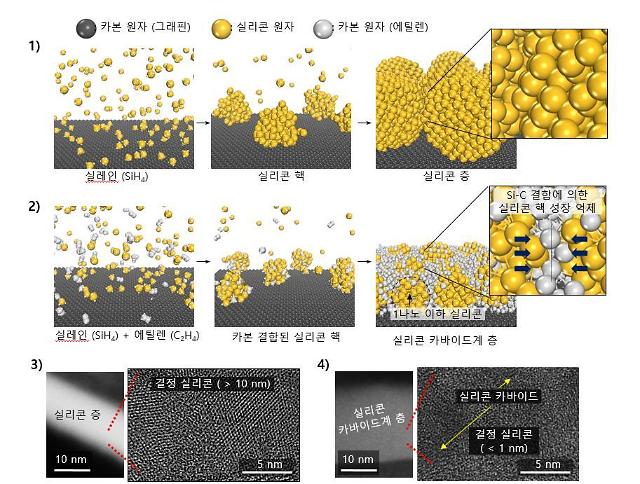 SEOUL -- Researchers from a state technology institute have developed a composite anode material that can be used for extending the lifecycle of high-capacity batteries used in electric vehicles. The anode material made of silicon embedded in a highly stable dual matrix composed of carbon and silicon carbide has up to three times more capacity than ordinary commercial graphite anodes used in EV batteries.

Anodes play an important role inside a high-capacity battery. The more ions the anode can hold, the higher its energy capacity. The most ideal anode material is lithium metal. Electric vehicle (EV) batteries with lithium metal anodes have more than double the energy density of current EV batteries. However, lithium metal solid-state batteries have not yet been commercialized due to their poor safety and expensive costs.

The Ulsan National Institute of Science and Technology (UNIST) said in a statement on December 14 that its research team has developed a technique to create a subnano-sized silicon anode that is highly durable. The production of the anode is very simple without the process of mixing the compound with graphite.

Ordinary silicon anodes have up to ten times higher energy capacity than graphite anodes but silicon anodes swell up to about three times their normal size when during the charging and discharging processes. The expansion and contraction of anodes cause structural damage and increase the risk of explosion due to gases created during the expansion process.

The silicon carbide anodes went through some 28,000 charging and discharging processes and maintained about 91 percent of their original capacity, the researchers said. The anode with superior characteristics will be ideal for EV batteries and for energy storage systems (ESSs).

"Wet production methods including a grinding process were widely used for the manufacturing of nanoparticles for silicon anodes. Our new anode is created through a dry manufacturing process that makes mass production easy and cost-effective," UNIST head researcher Cho Jae-pil was quoted as saying.