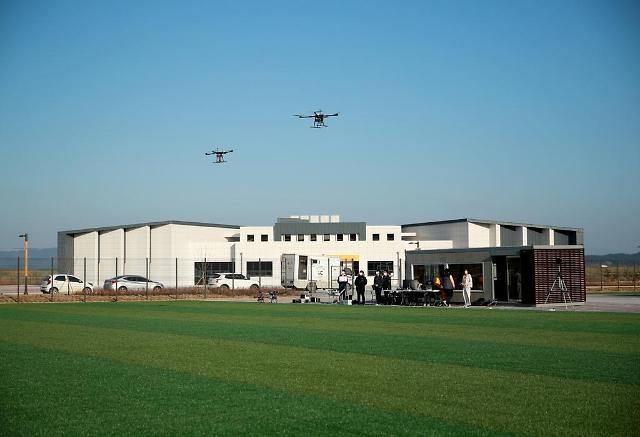 SEOUL -- Through a 9.5 billion won ($8 million) provincial project, South Korea's largest drone theme park was constructed in a drone regulation-free zone in the southwestern tourist town of Taean to provide a space where visitors can freely operate their drones. The theme park can be also used as a research and development lab for drone developers.

Operating drones without permission is illegal in many urban areas including Seoul as it poses a risk of violating people's privacy. Illegal drone flights can also cause severe damages to airplanes. As of August 2021, some 170 cases of unauthorized drone flights were spotted near Incheon International Airport, South Korea's main gateway. Illegal drone operators can be slapped with a fine of up to two million won ($1,765). Taean Country was selected as South Korea's regulation-free zone for drones in 2020. Drone developers can freely use the tourist town as a testbed for newly developed drones.

Taean County said in a statement on December 14 that a ceremony was held in Taean some 110 kilometers (68 miles) southwest of Seoul to commemorate the construction of UV Land. The theme park, which is about the size of two football fields, has a multi-purpose building, 400 meters long runway and a training center for drone pilots. The theme park has a lawn area that is about 4,000 square meters wide. Visitors can operate various drones and unmanned aerial vehicles on the lawn and runway. The theme park will open in March 2022. A private university specialized in aviation studies will be in charge of drone training and events.

"We will bring drone-related companies and organizations to UV Land to create new job opportunities. We will also operate various programs to become a city specialized in drone-related industry and tourism," Taean Mayor Ka Se-ro was quoted as saying.

In the early days of commercial introduction, drones equipped with optical equipment were mostly used to carry out dangerous tasks. However, their role has been expanded to many other fields including food and parcel delivery. In December 2021, smart farm drones that can analyze crops' temperature and humidity were showcased in Chuncheon some 75 kilometers (46.6 miles) northeast of Seoul.
© Aju Business Daily & www.ajunews.com Copyright: All materials on this site may not be reproduced, distributed, transmitted, displayed, published or broadcast without the authorization from the Aju News Corporation.