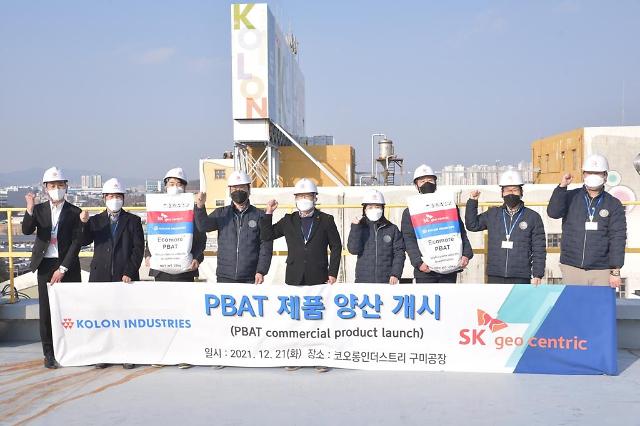 Polybutylene adipate terephthalate (PBAT) is a petroleum-based biodegradable plastic that rapidly degrades through enzyme reactions with oxygen, heat and light. Unlike regular plastic products which take about 100 years to decompose, 90 percent of a PBAT product degrades naturally when buried. PBAT is widely being used in eco-friendly products such as agricultural vinyl and disposable bags. To commercialize the petroleum-based biodegradable plastic, SK Geo Centric and Kolon Industries launched a joint research project in 2020.

3,000 tons of PBAT can be produced at Gumi Plant annually. SK Geo Centric plans to increase the production capacity to 60,000 tons per year by 2024 through cooperation with the textile manufacturing company. "PBAT decomposes quickly after it is buried in a landfill. We expect it will be widely used in various sectors because of its eco-friendly feature," Kang Dong-hoon, SK Geo Centric's Green Business Bureau Vice President, was quoted as saying.

According to data released by global market research company Statista, the global biodegradable plastics market will rapidly grow to $23.3 billion by 2026 from $8 billion in 2021. In September 2021, LG Chem, a chemical unit of South Korea's LG Group, partnered with domestic chemical fiber producer TK Chemical to establish a PBAT production line by the second half of 2021. In March 2021, South Korea's ocean ministry distributed biodegradable fishnets for crabs and yellow croakers by spending some 5.2 billion won ($4.7 million).
© Aju Business Daily & www.ajunews.com Copyright: All materials on this site may not be reproduced, distributed, transmitted, displayed, published or broadcast without the authorization from the Aju News Corporation.