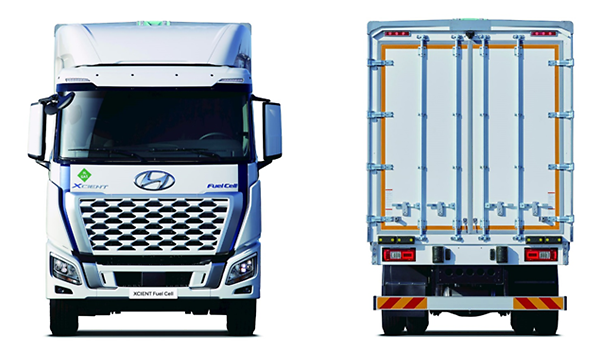 [Courtesy of the Land, Infrastructure and Transport Ministry]


SEOUL -- South Korea launched a government-sponsored program to test cargo trucks powered by hydrogen fuel cells in actual logistics services. The one-year test operation is aimed at expediting the conversion of large trucks into eco-friendly vehicles as part of a government campaign to achieve carbon neutrality.

The program began after a ceremony hosted by government agencies on December 23.  Five 11-ton demo trucks built by South Korea's Hyundai auto group were handed out to three logistics companies including two for CJ Logistics, two for Hyundai Glovis and one for Coupang. They have a driving range of about 570 kilometers (354 miles) on a single charge.

"I think it is more meaningful to develop homemade hydrogen cargo trucks and conduct pilot projects. I hope this pilot project will serve as an opportunity to convert large trucks into eco-friendly vehicles and take a step further toward carbon neutrality," Land, Infrastructure and Transport Minister Noh Hyeong-ouk said in a statement.

Hyundai's fuel cell trucks have proven their commercial viability through driving since they debuted in Switzerland in 2020. In July 2021, the auto group secured a solid bridgehead for the distribution of hydrogen trucks in the United States by gaining the support of California funding agencies and local communities to demonstrate an upgraded model called "Class 8 XCIENT Fuel Cell" with a maximum driving range of about 800 km.

Hyundai's 30 demo trucks will be deployed to northern California by the second quarter of 2023. The auto group is working on an upgraded model capable of traveling up to 1,000 km on a single charge.