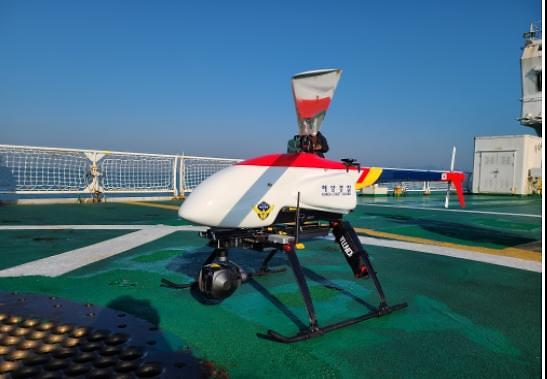 [Courtest of the Korea Coast Guard]


SEOUL -- Seven helicopter-type drones were deployed to South Korean coastguard vessels of more than 1,500 tons for a pilot operation to test their applicability in searching for those missing in the sea or cracking down on illegal fishing by Chinese boats that have caused diplomatic trouble.

The battery-based unmanned helicopter can fly for up to 75 minutes using, the Korea Coast Guard said, adding that it can return to its mother ship using an automatic flight function, even if communication is lost or fails. "This is the first step to develop our long-distance mission capabilities by exerting synergy with skilled coastguard vessels," Ryu Yong-hwan, a coastguard official, said in a statement on December 24.

Evidence on illegal operations can be easily collected through real-time video transmission even at a distance of up to 20 kilometers (12 miles). Optical thermal image equipment was applied for missions even in bad weather or at night. Along with a long-distance communication system and encryption modules, communication repeaters were installed in coastguard vessels to conveniently operate unmanned helicopters.

Preneu, a drone company in South Korea, has supplied helicopter-type drones based on its product called "Ruepel," which can carry survey equipment to gather space information and transport emergency supplies to secluded islands and areas affected by disasters.

South Korea has incessantly captured and fined Chinese boats for illegal fishing. Coastguard operations were risky as Chinese fishermen sometimes used steel pipes, knives and other weapons, triggering violent clashes that have caused casualties on both sides. Three Chinese fishermen were killed in 2016 when a fire broke out during a raid by coastguard commandoes using stun grenades.

The coastguard has established a dedicated department to effectively utilize drones and unmanned aerial vehicles. In May 2021, a VELOS V2 unmanned surveillance helicopter installed with built-in cameras and sensors was deployed to a 1,500-ton patrol boat operated by the coastguard's regional headquarters in the southern port city of Busan. VELOS V2, manufactured by U.S. UAV maker Velos Rotors, can fly up to 130 km and cover an area of up to 20 km in radius.