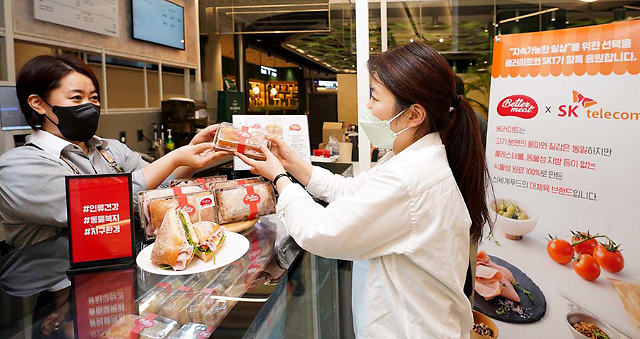 Shinsegae Food said in a statement on December 27 that its vegan meat-based cold cut ham was used to make sandwiches served at SK Telecom (SKT)'s canteen used by employees for the first time. Shinsegae Food said that it will increase its vegan meat distribution channel to canteens operated by partner enterprises to promote and popularize plant based-meat.

"We will provide various options for consumers who are concerned about the environment and health. We will allow them to access alternative meat menus through various channels," an unnamed Shinsegae Food official was quoted as saying.

Vegan meat is gaining recognition for its low carbon characteristics. Data released by the Food and Agriculture Organization of the United Nations (FAO) showed that greenhouse gases emitted by the livestock industry account for some 15 percent of the world's total greenhouse gas emissions. By reducing the consumption of meat and dairy products, the total amount of emissions by animal-based food can be reduced up to 73 percent.

South Korea's vegan meat market has been rapidly growing to meet demands from some 2 million vegans. According to market research firm Euromonitor, the country's vegan meat market stood at 10.2 billion won ($8 million) as of 2020. Emart, the megastore wing of Shinsegae, is also selling an alternative meat brand called "Unlimeat" at meat sections in 20-selected Emart stores.
© Aju Business Daily & www.ajunews.com Copyright: All materials on this site may not be reproduced, distributed, transmitted, displayed, published or broadcast without the authorization from the Aju News Corporation.