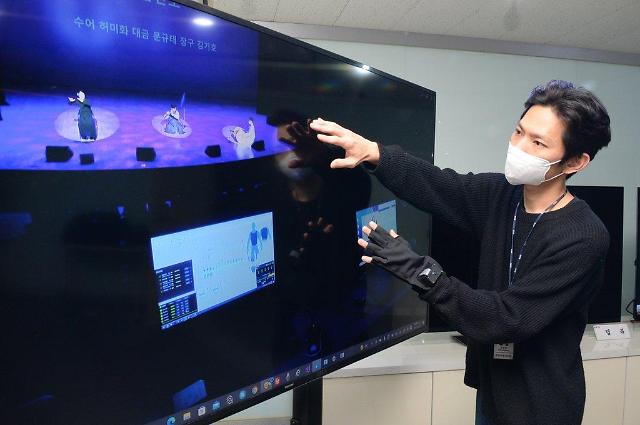 SEOUL -- To help hearing-impaired people enjoy music performances, a state-funded research body in South Korea showcased a real-time tactile tone system that delivers the exact tone of an instrument in forms of vibration. The new technique was adopted in traditional Korean music performances held in the southern port city of Ulsan where Korean bamboo flutes called "Daegeum" were used.

The tactile tone system analyzes sound frequency signals and converts them into tactile patterns. Different vibration patterns are delivered to the audience. Hearing-impaired people can feel the tones by wearing special haptic devices.

The Electronics and Telecommunications Research Institute (ETRI) said in a statement that the tactile tone system developed in 2020 was used for two offline traditional Korean music performances held in 2021. "15 hearing-impaired people experienced the tactile tone system by wearing haptic gloves and haptic vests," Baek Ji-heon, ETRI's public relations official, told Aju Business Daily on December 29. The gloves were made by the institute and the vests were produced by domestic tactile suit developer bHaptics.

The tactile tone system was optimized for Korean traditional music which only has five tones. ETRI's haptic technique is capable of simultaneously delivering changes of musical tones and rhythm through a pair of gloves and a vest.

"Because the tactile tone devices have not yet been commercialized, only a few people could experience the technique during the performance. We will focus on the improvement of the devices' sensor recognition and the development of various music content for hearing-impaired people," Baek said during the interview.
© Aju Business Daily & www.ajunews.com Copyright: All materials on this site may not be reproduced, distributed, transmitted, displayed, published or broadcast without the authorization from the Aju News Corporation.