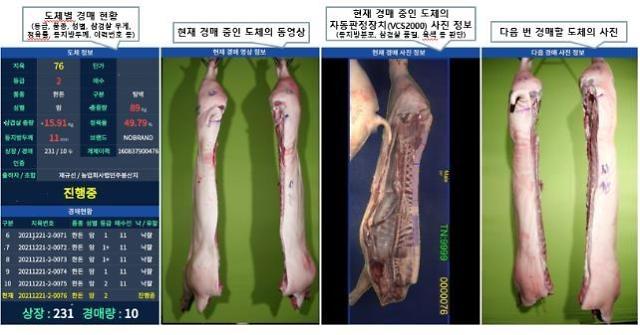 [Courtesy of the Ministry of Agriculture, Food and Rural Affairs]

SEOUL -- South Korea's agriculture ministry started the demonstration of online pork carcass auction to establish a stable non-face-to-face livestock product trade system that will not be affected by pandemic situations caused by a coronavirus or the African Swine Fever. The new auction system will be officially adopted in 2023 after a test run.

An online auction is an ecommerce platform where products are sold to the bidder. A pork carcass is normally a half-section of pig containing bone and meat. The head, blood and intestines are removed during the slaughtering process. A carcass is cut into portions after it is delivered to its bidder.

The demonstration of an online pork auction was carried out at a slaughterhouse in the southern city of Naju on December 29, the Ministry of Agriculture, Food and Rural Affairs said in a statement. The slaughterhouse was selected as a pilot wholesale market site in April 2021. Various online transaction systems including a video image-based product information system have been adopted at the site. The video system provides information such as the quality grade and weight of a carcass so that traders bid.

"We hope that online livestock product auction is popularized so that the new trade system can vitalize the domestic meat wholesale market," Park Bum-soo, the agriculture ministry's livestock policy bureau, was quoted as saying. The ministry plans to add other livestock products during the demonstration including beef.