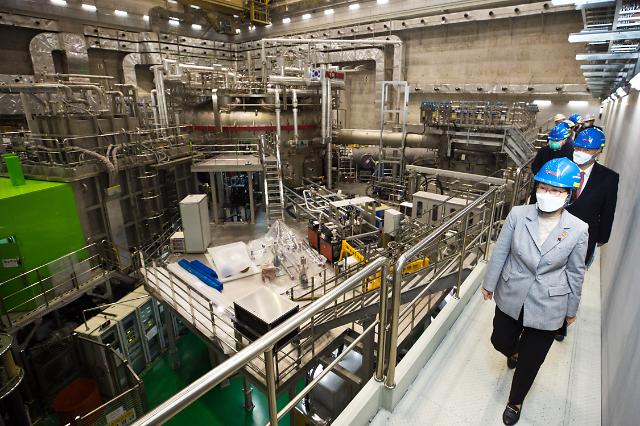 SEOUL -- As a key member of an international "artificial sun" project, South Korea has unveiled a challenging goal to demonstrate the production of nuclear fusion power in the 2050s and secure core technologies by upgrading the performance of a tokamak that uses a powerful magnetic field to confine plasma and produce controlled thermonuclear fusion power.

A roadmap disclosed by the Ministry of Science and ICT on December 31 called for the preliminary concept design of a demonstration reactor in 2023. The state-run Korea Institute of Fusion Energy (KFE) will seek to achieve 300 seconds in maintaining a plasma center ion temperature of 100 million degrees Celsius.

In November 2021, KSTAR, a magnetic fusion device run by KFE, set a new record of 30 seconds in a super-hot plasma field. To improve its record, KFE would use a tungsten divertor to improve power supplies and suppress rising inner wall temperature. The divertor is a component that discharges impurities such as helium to the outside of a nuclear fusion reactor. High-performance plasma operations require tungsten instead of carbon.

"It is very important to establish a system that can strategically unite our capabilities in order to secure competitiveness in the recent dynamic global environment," Science and ICT Minister Lim Hye-sook said in a statement. She said the government would support the realization of nuclear fusion energy by securing core technologies and creating a preemptive foundation.

Fusion power has long been spotlighted as a safe next-generation power source capable of reducing radioactivity, but it's extremely difficult to produce a state of controlled fusion. Seven countries including South Korea, the United States, China and EU members have been involved in the International Thermonuclear Experimental Reactor (ITER) project to build an experimental fusion reactor in Cadarache, France. If the ITER experiment is successful, it could provide mankind with a limitless energy source.

South Korea will cooperate with the European Union to jointly develop ITER's test blanket module (TBM). ITER faces many unprecedented challenges in the remote handling and maintenance of components in hostile environments. A breeding blanket will generate tritium consumed during fusion reaction.

South Korean and EU researchers have agreed to safely operate the fusion reactor and conduct related studies that would focus on reducing the damage inflicted on ITER devices due to the instantaneous collapse of plasma. Researchers share test data from KSTAR and the Joint European Torus (JET), the world's largest operational magnetically confined plasma physics experiment device.