LG and Samsung to attract consumers with new TV lineups 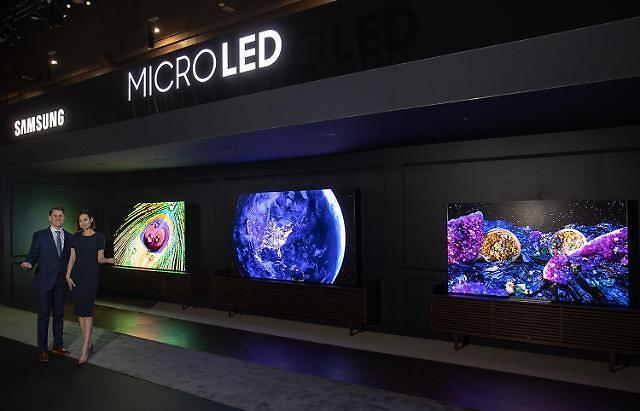 LAS VEGAS -- The world's top electronics makers Samsung Electronics and LG Electronics will clash head to head at the Consumer Electronics Show 2022 to be held in Las Vegas by showcasing their latest TV models with diversified form factors.

According to industry officials on January 4, LG Electronics released its business strategy for self-luminous TV businesses and unveiled a new organic light-emitting diode (OLED) TV lineup through a press conference in South Korea. The new models are to be showcased at the Consumer Electronics Show (CES) 2022.

LG will present CES with new 42-inch, 55-inch, 65-inch and 97-inch OLED TVs. The world's largest 97-inch OLED TV targets the premium market while the 42-inch TV targets the second TV or gaming market. LG will unveil a new OLED evo lineup that is capable of displaying a clearer image compared to the 2021 model lineup. The display capability of the new TVs has been improved through the adoption of upgraded image processing technology. OLED evo's lineup will be expanded from three models to 11 models in two series.

Other TV-related technologies including liquid crystal display (LCD) TVs will also be showcased at the event. StandbyME, a portable private display that garnered popularity at home, will target the global market in 2022.

Samsung Electronics will not focus on the "optimized screen" market with various TV lineups such as micro-LED, Neo quantum-dot LED (QLED) and lifestyle TV. While the South Korean electronics maker has decided not to unveil its quantum-dot (QD) OLED TV at CES, industry officials predict that Samsung will make a foray into the global OLED TV market with its new creation.

Samsung will unveil its 101-inch and 89-inch micro LED TVs at the CES event. The new micro LED TVs are easy to install and have the ability to unleash their display potential through functions such as "art view" and "multi-view" as well as powerful audio systems.

Neo QLED has improved all key elements of a TV such as an image quality, sound and smart functions. It also provides a user experience optimized for "In-Home Activity." Samsung's image quality engine called "Neo Quantum Processor" has been upgraded and a large number of technologies have been adopted to maximize the three-dimensional effect and realism of images.