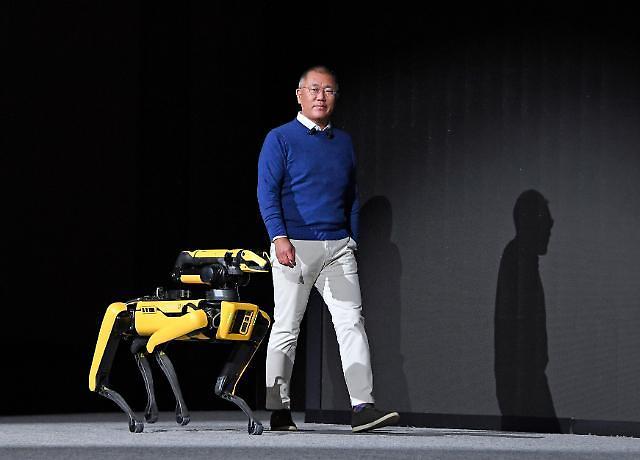 LAS VEGAS -- Hyundai auto group's chairman Chung Eui-sun appeared with a robot dog at this year's Consumer Electronics Show, the world's largest annual electronics exhibition. The robot dog Spot was developed by Boston Dynamics which was acquired by Hyundai in 2021.

As Chung cited Spot as a good companion, the robot autonomously walked out of the podium. The Hyundai chairman has shown the audience that the future of robotics was right around the corner and that humans can become friends with robots.

Chung announced his vision for robotics at a press conference at the Mandalay Bay Convention Center in Las Vegas on January 6, 2022, under the theme of "Expanding Human Reach."

After letting Spot leave the podium, Chung said that robotics is no longer a distant dream. "At Hyundai, we are harnessing the power of robotics to achieve great things," he said, adding that metaverse is not just a virtual world that exists outside of reality. Even if it may be just considered as a game platform at the moment, Chung predicted that the metaverse will become an important part of our daily lives if it is popularized.

Chung also presented a new definition of robotics. Beyond overcoming human limitations, he said robotics is a new concept that gives mobility to all objects and further breaks the boundary between the virtual world and the real world.

"We envision future mobility solutions made possible by advanced robotics, even expanding our mobility solutions to Metamobility," he said, adding, "this vision will enable unlimited freedom of movement and progress for humanity." On the same day, Hyundai also unveiled Plug & Drive (PnD) and Drive & Lift (DnL) platforms that can freely move all objects to any place.

Hyundai's vision for robotics, which was announced by Chung, will be actualized through "metamobility" where users' mobility experiences will be significantly expanded, "Mobility of Things (MoT)" ecosystem that enables the movement of all objects and "intelligent robots" for humans. Hyundai expects the development of robotics technology such as artificial intelligence (AI) and autonomous driving to blur distinctions between future mobilities. Hyundai said that various mobilities such as automobiles and Urban Air Mobility (UAM) will serve as smart devices to access metaverse platforms.