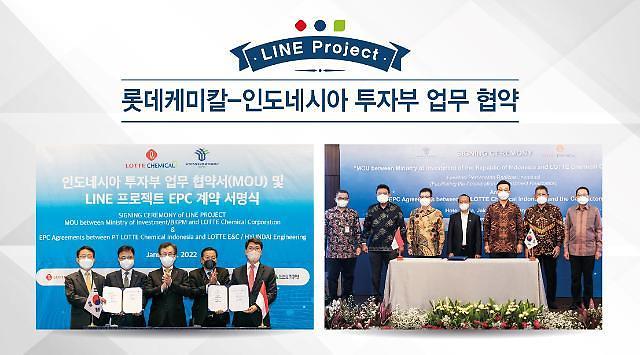 SEOUL -- Lotte Chemical, a major chemical company based in South Korea, put on track a megaproject to develop a petrochemical complex in Indonesia. The Indonesian government promised incentives such as lowering tariffs on raw materials and strengthening tax benefits for various facilities and equipment used to build factories.

For its LINE project, Lotte Chemical said it signed a memorandum of understanding with the Indonesia Investment Authority in an online ceremony on January 7. Separate engineering, procurement and construction (EPC) agreements were signed with Lotte E&C and Hyundai Engineering.

With an injection of $3.95 billion, Lotte will build a plant capable of producing one million tons of naphtha cracker per year and other related downstream facilities in Cilegon in Indonesia's Banten province.

Lotte Chemical, a key unit of Lotte Group, is the country's second-largest producer of ethylene after LG Chem. In a bid to become a major player in the global ethylene market, Lotte has established a network of overseas production with plants. The project in Indonesia was proposed by Lotte Group Chairman Shin Dong-bin in 2011, but talks have been on and off due to various reasons.