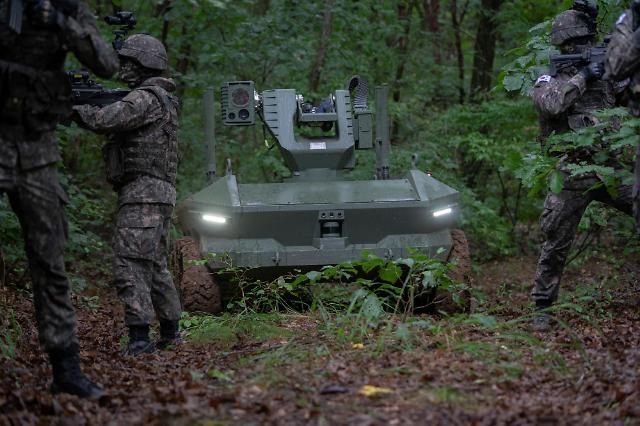 SEOUL -- The warfare-ready deployment of multi-purpose two-ton unmanned ground vehicles developed by Hyundai Rotem, a subsidiary of South Korea's Hyundai auto group, began after they passed a six-month military test operation in front-line border areas. It was the first unmanned vehicle that has been introduced by South Korean troops.

Hyundai Rotem said its six-wheeled multi-purpose unmanned ground vehicles (UGVs) with cameras that can detect images up to four kilometers away day and night in real-time through monitors serve as an essential weapon system for reconnaissance in a wide range of coastal and border areas. It's not known immediately how many UGVs will be deployed for military use.

"The technology and reliability of UGVs have been recognized through successful military pilot operations such as vigilance, reconnaissance, close combat, and material delivery," an unnamed Hyundai Rotem official said in a statement on January 10. The company said the deployment of UGVs laid the foundation for the development of remote unmanned technologies that can be used for tanks and armored vehicles.

For a test operation that began in July 2021, Hyundai Rotem provided two UGVs to test remote driving in various terrain and environments, the autonomous driving of route points, and the automatic following of vehicles or personnel. Their technology and reliability were recognized through various operations such as close combat and cargo delivery.

The upper front is equipped with a remote-controlled weapon station, and its back has a loading box capable of carrying more than 200 kilograms of cargo or transporting patients in case of an emergency. All six wheels are equipped with an in-wheel motor, allowing each wheel to exert independent driving power.

Hyundai Rotem's UGV is based on HR-Sherpa, a six-wheeled model that features an electric drive system, a 360-degree rotation function, a skid steering system and airless tires for rough driving. HR-Sherpa, which is 2.4 meters long, can run at a maximum speed of 30 kilometers (18 miles) per hour. A water-cooled battery system and an integrated heat management system enable long-distance driving and all-season weather operations.

In October 2021, Hyundai Rotem's leg-wheel military robot called "DOSS (daring operations in service and search)" was showcased at an international aerospace and defense exhibition in South Korea. The ultimate mobility vehicle (UMV) uses wheels in flat terrain, but intelligent robot legs use walking ability in rough terrain for various missions such as surveillance and the transportation of injured people and goods. Remote and autonomous driving is possible.