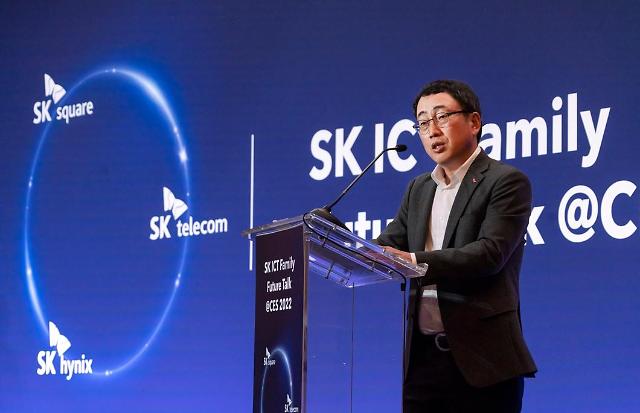 SEOUL -- SK Telecom, a South Korean mobile carrier that has aggressively adopted new technologies, will establish a new U.S. entity for the global promotion of ts artificial intelligence semiconductor chip called "SAPEON" through cooperation with two other SK Group units. The lineup of AI chips will be expanded gradually for data centers and autonomous driving.

The new entity named SAPEON Inc. serves as an outpost for expanding its AI semiconductor business targeting U.S-based big tech companies as its main customers. It would be the first joint task to be carried out by a tripartite in-house business alliance involving SK Telecom (SKT), SK hynix, the second-largest memory chip producer in South Korea, and SK Square which has been spun off from SKT to focus on semiconductors and information and information and communications technology (ICT).

The alliance was launched on the sidelines of CES 2022 in Las Vegas to jointly invest in ICT convergence technology and promote global expansion. "The SK ICT alliance will work together to make a big leap and innovation in the global market," said SK hynix vice chairman Park Jung-ho. The alliance aims to unveil new services that have not existed before by adding advanced connected intelligence to autonomous driving, robots and urban air mobility.

SKT has led a state project to develop next-generation AI chips and interfaces that can be utilized for high-performance servers like cloud data centers. The deep learning computation speed of SAPEON X220, unveiled in November 2020, is faster than that of graphics processing units widely used by AI-service companies. SKT aims to combine AI chips and 5G edge cloud. The application of an AI chip to a cloud located close to the end-users will enable the provision of high-quality AI services with ultra-low latency regardless of customer devices.

SK Square would expand its investment in next platforms such as metaverse and blockchain, while SKT is to release an AI secretary service, link it with a metaverse platform, and introduce AI-VERSE, an integrated service that can even allow users to engage in economic activities.

"The AI secretary service is a concept in which avatars of each smartphone customer acts as a secretary or friend," SKT CEO Ryu Young-sang said in a statement on January 10. "This will lead to a future in which customers live in both reality and virtual worlds at the same time."

In July 2021, SKT launched a tolerant metaverse platform called "Ifland" that would maximize user experience through diverse virtual spaces and avatars. SKT would nurture Ifland into a leading metaverse platform by enhancing user convenience. The company plans to boost the popularization of Ifland by running special programs and providing content that meets the needs of users.

Four months later, SK Square invested 90 billion won ($75 million) to become the second-largest shareholder of Korbit, which is South Korea's first cryptocurrency exchange platform that operates a metaverse virtual asset exchange platform called "Korbit Town" and a trading market for non-fungible tokens (NFTs), which are a unique and non-interchangeable unit of data stored on a digital ledger and can be bought and sold digitally.

The investment in Korbit was made to operate an economic system within SKT's metaverse platform, Ryu said. "We will overcome our shortcomings as soon as possible by adding games, entertainment, and an economic system."