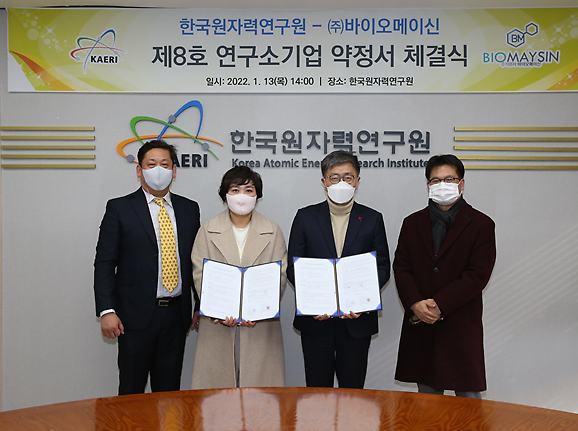 
SEOUL -- A bio venture with technology and other support from South Korea's government-funded research body was set up to produce beauty products based on maycine extracted from centipede grass, a popular turfgrass for lawns in warm areas. Maysin and derivatives were found to have various biological activities, but research has been carried out limitedly.

Maysin is found in the silks and leaves of maize, teosinte and centipede grass. A team led by Chung Byung-yeoup from the Advanced Radiation Technology Institute at the Korea Atomic Energy Institute separated maysin and its flavonoid derivative from centipede grass and confirmed their applicability as a potential functional ingredient in health-beneficial foods or as a therapeutic agent.

Chung's team has extracted useful physiologically active mixtures and increased the content of substances with gamma and ultraviolet irradiation. For commercialization, the research body signed a deal on January 17 to transfer technology and set up an enterprise named "Biomaysin" in Jeongeup some 210 kilometers (130 miles) southwest of Seoul.

Maysin's extract is effective in anti-aging, whitening and skin trouble prevention, wrinkle improvement, and anti-balding, Chung said, adding that he would try to expand the application of maysin to obesity, skin cancer, diabetes, Alzheimer, and immune enhancement.