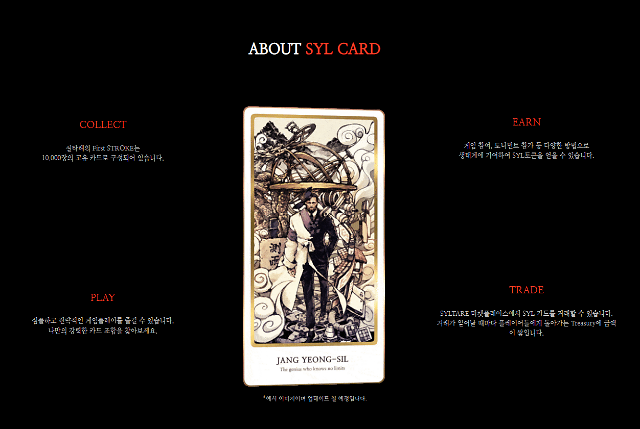 SEOUL -- WeMade, an online game developer in South Korea, made an unspecified amount of strategic investment in Syltare, a play-to-earn trading card game that uses non-fungible token cards, as part of efforts to accelerate the creation of a new market that engages gamers and blockchain technologies.

Play-to-earn (P2E) games are early-stage metaverse platforms that add innovative economic models that allow players to earn a steady income for playing. P2E games are usually powered by a blockchain, offering rewards and incentives to users based on their platform activity or related in-game achievements. As users earn cryptocurrency based on their gaming activities, they can exchange them for assets on exchanges.

Blockchain is a decentralized service that shares replicated and synchronized data geographically spread across multiple servers operated by countries or organizations. Each virtual ledger works as a verification tool, making it almost impossible to hack or manipulate. NFT can represent a unique digital file such as art, audio, video, and an item in video games. It is authenticated using a blockchain platform and provides proof of ownership.

Syltare, developed by Like Lion known for its programming education, is a Klaytn-based P2E NFT trading card game in a format in which users compete with each other by forming a deck with a total of five cards. Each card is an NFT, and a  total of 9,500 cards have been minted.  Minting is the term used to describe the process for turning digital files into nonfungible tokens that can be bought using cryptocurrency.

Klaytn is a public blockchain platform developed by Ground X, the blockchain service wing of South Korean web service giant Kakao. Like Lion provided a Klaytn-based development education program and its new 3D PFP NFT project, MetaKongz, has sold out 10,000 NFTs in seconds over three rounds. PFP is an acronym in texting and social media. It means both pictures for proof and profile pic.

"WeMix, which encompasses the entire blockchain, such as games, NFT, and decentralized finance, will be the best partner for Syltare," WeMade CEO Henry Chang said in a statement on January 17.  "We hope to create a cooperative structure in connection with WeMix's various services."

Through cooperation with game developers, WeMade aims to introduce 100 blockchain games that use WeMix tokens as key currency by the end of 2022. On January 14, WeMade forged a business partnership with RedFox Games, a U.S.-based software company that provides a game publishing service, to promote blockchain-based games, especially in South America.

In December 2021, WeMade acquired SundayToz, a social and mobile game developer known for creating the Anipang series, to strengthen the lineup of casual games on the blockchain platform and expand the social casino genre.

In a separate deal on January 17, WeMade signed a memorandum of understanding with SundayToz and its subsidiaries to cooperate in their blockchain business. "WeMix is the only existing platform that can convert all genres of games into blockchain games," Chang said. "Casual games and social casinos are not only games that go very well with the blockchain economy, but the expansion of these genres will create an inter-game economy that has never existed before to expand the WeMix ecosystem."