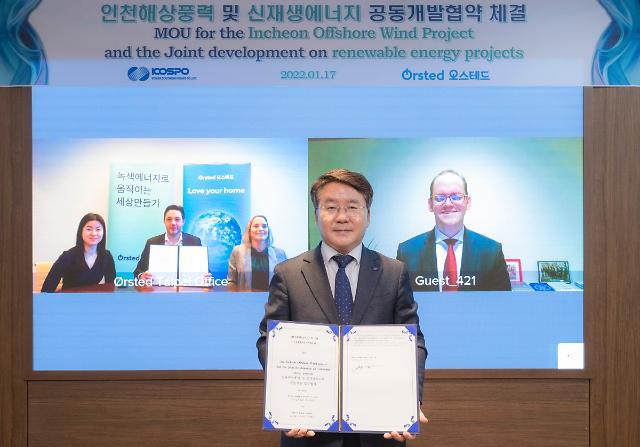 A business agreement was signed between Korean Southern Power (KOSPO) and Osted on January 17 to develop an 800-megawatt offshore wind farm capable of supplying power to some 650,000 households. They will select a site in the sea more than 70 kilometers (43 miles) away from the coastline to minimize an environmental impact in Ongjin County that consists of a group of islands in the Yellow Sea.

"This agreement will be of great help in expanding our new renewable energy business," said KOSPO CEO Lee Seung-woo. "We hope it will not only achieve the government's energy conversion goal but also speed up the development of large-scale offshore wind power."

Orsted unveiled a green energy project in November 2020 to establish an offshore wind power complex with a potential capacity of up to 1.6GW near Kurop Island in Ongjin County. The site has relatively shallow water depths to allow for cost-effective development. The project requires about eight trillion won ($6.7 billion). Orsted aims to commission the project from 2026 that could provide clean energy to more than 1.3 million households.

The Danish company has promised to shape a competitive supply chain with local companies as part of South Korea's green energy campaign to achieve net-zero emissions by 2050. The Seoul government has endorsed a number of projects to build clean energy facilities, including solar power plants and wind farms, onshore and offshore. Offshore wind farms consume less space compared to other renewable energy sources such as solar power plants and can survive extremely harsh environmental conditions.